The AAAS Dialogue on Science, Ethics and Religion (DoSER) program looked ahead to the future and reaffirmed its commitments for its 25th anniversary.
5 minute read
Save to my list
Download as PDF

This is a reposted article from the AAAS News, written by Andrea Korte; read the original here. 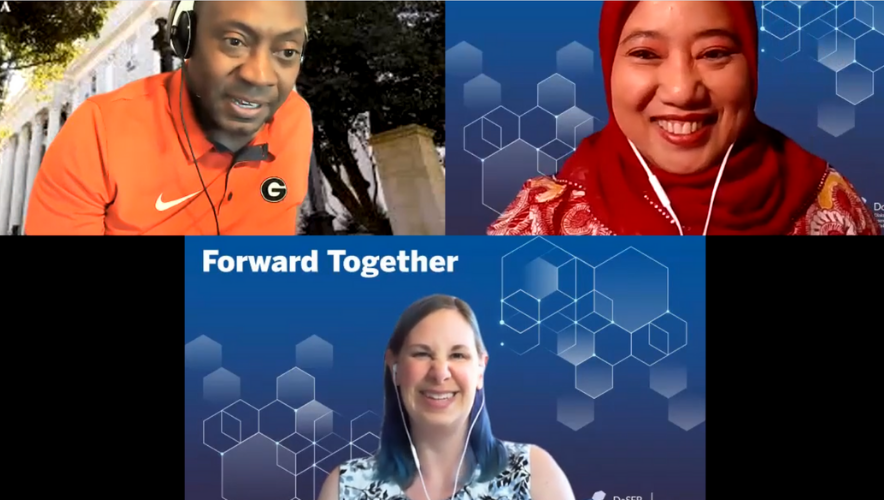 Panelists take part in a session on climate and the environment during DoSER’s virtual anniversary event. | AAAS

In celebration of its 25th anniversary, the AAAS Dialogue on Science, Ethics and Religion (DoSER) program looked ahead to the future and reaffirmed its commitment to creating connections between scientific and religious communities.

The event, “Forward Together: Where Science, Ethics, and Religion Intersect in a Changing World,” was held virtually in June and is now available to all viewers. Panel presentations and small group discussions touched on timely topics at the intersection of science and religion, including climate change, public health, genetics, artificial intelligence and racial justice.

As DoSER Director Jennifer Wiseman told Science in advance of the event, the topics that spur dialogue among and between scientific and religious communities have evolved throughout the years.

That is why DoSER – through its broad range of programs, activities and public events – has focused on a mission that transcends subject matter: “building connections between people, so that scientists and faith communities get a chance to know each other,” according to Wiseman.

The importance of forging and cultivating relationships is a message that echoed throughout “Forward Together.”

“We know that science and technology interrelate with all aspects of our lives these days,” said Wiseman in her introductory remarks. “If scientists are really going to be effective at serving society with science, we need to recognize that religious faith is an important part of most people’s worldview and their identity.”

Although scientific and faith groups are often seen as separate, the communities are not at odds. In fact, there is significant overlap between these communities, and there is great interest in finding common ground, Wiseman said.

Members of faith communities, for instance, are “hungry” to learn about science, said Wiseman. They are curious to understand “how the advances in science can inspire us, can uplift our spirits, can enrich even concepts of faith, but also how science and technology can be used to serve people around the world.”

Throughout DoSER’s 25-year history, “we’ve discovered that building these relationships and bringing people together is what is the most helpful in the science and religion interface,” said Wiseman.

Other speakers also offered examples of successful relationship-building between scientific and faith communities.

In addition to her work as a research scientist and professor of biology at the University of Utah, plenary speaker Nalini Nadkarni engages with a range of audiences, including faith-based groups, on the value of trees.

Nadkarni values trees – her area of study – for a number of reasons, including their ecological importance. But she also seeks to understand how religious groups might value trees and nature in different ways.

After all, said Nadkarni, “people will take care of and protect what they value.”

Nadkarni read religious texts such as the Bible, the Quran, the Talmud and the Book of Mormon and catalogued references to trees. She delivered sermons connecting these values at more than 40 houses of worship and created pamphlets about trees that grow on the grounds of those houses of worship. And, in a demonstration of the importance of two-way communication, members of the Mormon Tabernacle Choir attended a meeting of ecologists to sing songs about nature.

“Ecologists could literally listen to what the members of this faith celebrate about nature, which is exactly what ecologists do as well,” said Nadkarni.

Scientists who took part in the forum noted the importance of finding willing partners among religious leaders and community members to solve big problems. Pamela Payne Foster, professor at the University of Alabama School of Medicine in Tuscaloosa, and Michaela Howells, assistant professor of biological anthropology at the University of North Carolina, Wilmington, spoke during a session on public health on the lessons in humility and collaboration that have helped address public health challenges and disparities – and how those lessons can be incorporated into addressing the ongoing COVID-19 pandemic, which is disproportionately affecting communities of color.

Foster cited the importance of scientists to avoid longstanding tendencies toward arrogance.

“We’ve seen that over and over again where we come in as experts. We know everything and think we know what’s going on in the community,” said Foster, something she has noticed with COVID response. However, she noted, “the community knows better,” said Foster.

She cited the government’s push for vaccinations in the rural South that focused solely on finding a space large enough to administer vaccinations en masse, while ignoring other factors about where vaccination clinics might be most needed. Foster encouraged scientists and other public health practitioners to speak with community leaders and members – including faith leaders and religious communities – to learn more about the community landscape and better understand what might best meet their needs.

Other panelists echoed the importance of valuing faith communities’ contributions to conversations about scientific work with significant societal implications, such as artificial intelligence (AI). AI panelist J. Nathan Matias, assistant professor in the Department of Communication at Cornell University, spoke about the importance of ensuring that faith communities understand the role of AI in society and helping religious leaders take action against systemic issues like surveillance.

Matias also emphasized the importance of faith communities’ voices in such conversations and cited several forums where these conversations can take place. For instance, hackathons can bring together engineers of faith to think critically about designing technologies, and academic conferences offer a space for scientists to learn from faith leaders about how theology relates to computer science, he said.

“People can still come together and create systemic change as communities of faith,” Matias said.

The Importance of Diverse Coalitions

Nana Firman, senior ambassador of GreenFaith, a multi-faith climate justice organization, also spoke about the importance of buy-in from many groups in taking meaningful action against complicated issues during a session on climate and the environment.

“To change everything, it takes everyone,” said Firman. She noted that Sacred People, Sacred Earth, a recently launched initiative from GreenFaith, brings together a diverse coalition – including people from all faiths and scientific backgrounds – to hold governments accountable and take climate action seriously.

“Together we can make the change, and the time to act is now,” said Firman.

How Attendees Can Take Action

J. Marshall Shepherd, the director of the Atmospheric Sciences Program at the University of Georgia, urged attendees to reframe what some see as a “collision between faith and religion.”

“I see it as an opportunity between science, religion and faith,” said Shepherd during the panel discussion on climate and the environment.

It is necessary to take conversations about science “out of these Zoom panels and out of these committees and conferences to the broader reach that we all have,” Shepherd said.

Additionally, at the event, Dr. David Anderson, founder and senior pastor of the Bridgeway Community Church and founder and president of BridgeLeader Network, called for attendees to become “bridge-builders,” even at the smallest of scales. “This summer, choose just one or two people in your network to have a conversation with,” Anderson urged.

Added Nadkarni, “You can have deep impact on a small number of people.”

The DoSER program actively supports scientists and science communicators in practicing inclusive and impactful engagement with the largely religious public.

Learn More
We use cookies on our website to give you the most relevant experience by remembering your preferences and repeat visits. By clicking “Accept All”, you consent to the use of ALL the cookies. However, you may visit "Cookie Settings" to provide a controlled consent.
Cookie SettingsAccept All
Manage consent