Science for Seminaries is a longstanding DoSER project that offers grants to a diverse group of seminaries so that they can integrate forefront science into their core curricula in order to help future religious leaders speak confidently about science.
2 minute read
Download as PDF 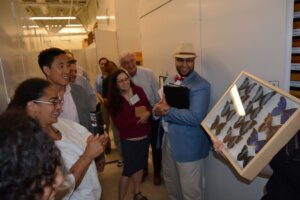 In consultation with the Association of Theological Schools (ATS), AAAS DoSER utilizes this project to help a diverse group of seminaries integrate science into their core curricula. The value of this project, long recommended by AAAS advisers, stems from the fact that many people look to their religious leaders for guidance on issues relating to science and technology, even though clergy members may have had little exposure to science in their educational experience. A joint survey conducted in 2013 by the American Association for the Advancement of Science (AAAS) and sociologists at Rice University found that some Christians (particularly evangelicals) are more likely than other religious groups to consult a religious leader or fellow congregant if they have a scientific question. Science for Seminaries aims to equip religious leaders with a solid scientific foundation from which to answer such questions.

Led by John Slattery and Curtis Baxter, Science for Seminaries offers a number of excellent resources to anyone interested in the science/religion conversation:

The Science for Seminaries project is dedicated to supplied pedagogical resources to help seminaries and theological schools bring world-class science into the classroom.  First, AAAS, in collaboration with Fourth Line Films, has produced an exciting series of films to spark classroom discussion of forefront science topics, called “Science: The Wide Angle.”  Click here to find out more and view the full set of films!

AAAS DoSER, in collaboration with Fourth Line Films, has produced an exciting series of short films to spark discussion of…