The AAAS DoSER program is celebrating 25 years of connecting science and religion on June 15 with a free virtual symposium entitled "Forward Together: Where Science, Ethics, and Religion Intersect in a Changing World."
5 minute read
Save to my list
Download as PDF

This is a reposted article from Science magazine; read the original here. 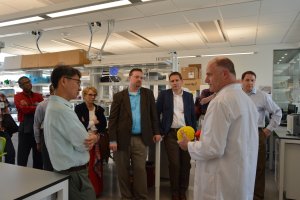 On 15 June, the AAAS Dialogue on Science, Ethics, and Religion (DoSER) program will celebrate its 25th anniversary with a program of speakers and group discussions, covering topics from artificial intelligence to racism. While DoSER (www.aaas.org/DoSER) has had notable successes in building relationships between religious and scientific communities, the anniversary is a prompt to look forward, not back, said the program leaders.

At the event, called “Forward Together: Where Science, Ethics, and Religion Intersect in a Changing World,” speakers “will talk about the issues that are hot topics in science and technology today that have a broad impact on life around the globe,” said DoSER Director Jennifer Wiseman, “and how faith communities are integral to good uses of science and technology going forward.”

The program has changed over the past quarter-century in several key aspects, mostly in expanding its outreach to new communities and enriching the resources available to promote the religion-science dialogue. The topics in science, technology, and ethics that have animated this dialogue have also changed over time, from early discussions about human origins and evolution to climate change, environmental stewardship, public health, artificial intelligence, neuroscience, genetics, science and societal justice, and more.

“But even now, our emphasis is not primarily on the topics,” Wiseman said. “It’s on building connections between people, so that scientists and faith communities get a chance to know each other.”

Part of the foundation for building these connections came from DoSER’s Perceptions Project, concluded in 2015, that investigated the beliefs scientists and religious leaders hold about each other. In a series of workshops held in six U.S. cities, members of both communities met—sometimes for the first time—to build the architecture for new relationships.

There is “sometimes a knee-jerk presumption that religious communities are going to be uninterested or even a little reticent to enter discussions involving science, and that is just not the case,” Wiseman said.

Science for Seminaries, a DoSER project active since 2013, helps U.S. and Canadian theological seminaries incorporate relevant science into their core curricula. The goal of the immensely popular program is to give future faith leaders the tools to engage with their congregations about science and technology issues that permeate nearly every aspect of life.

The final cohort of seminaries begins the program this spring, and DoSER hopes to continue the program with future funding. While the seminaries program has focused on Christian communities, DoSER’s outreach has expanded over time to reach out to other faiths as well.

One of DoSER’s partners is Sinai and Synapses, a program to bridge the Jewish faith and science led by Rabbi Geoffrey A. Mitelman. For the group’s Scientists in Synagogues initiative, “DoSER’s reputation and ability to engage scientists in high-level religious conversations have been instrumental in our success,” said Mitelman.

“As a layperson, it can be hard to distinguish scientific information that’s accurate from what’s well-meaning but inaccurate—let alone when willful deception enters the picture,” he added. “Being able to turn to a trusted source has been incredibly valuable, and as we engage Jewish communities in thinking about science, DoSER has been a tremendous resource.”

Scientists’ interest in engaging with religious communities “has grown dramatically” over the years, said Wiseman. In response, DoSER launched initiatives such as the Engaging Scientists in the Science and Religion Dialogue project, which provides connections and resources for scientists to build their relationships with the religious public.

Nalini Nadkarni, a University of Utah forest ecologist and conservationist who participated in the Engaging Scientists project, wanted to reach out to people who might not visit museums or botanical gardens. “I learned that over 80% of people self-identify as being religious or believing in God,” she said. “So I thought that if I could find common ground with faith-based groups about the positive values of trees for people, I would have a chance for finding allies to protect trees and nature.”

Nadkarni now speaks to religious groups from a new text that she created by combing through the scriptures of the world’s religions, sharing spiritual values that have been placed on trees and forests by these communities.

Her work with faith groups has reinforced an idea that she carries over into her outreach with other groups such as the incarcerated, urban youth, and artists, she said. “That is, a scientist must feel and show intellectual humility to be successful in engaging ‘the other,’” Nadkarni said. “Sometimes we have to put aside for the moment our own precepts and assumptions enough to truly listen, truly hear what the other group is articulating.”

DoSER has launched a new website, sciencereligiondialogue.org, that contains resources such as profiles of scientists who effectively engage with religious students and communities and short videos from the Science: The Wide Angle series. The series features scientists speaking about topics that also resonate with religious communities, like the “awe and wonder” inherent in the natural world, said Katy Hinman, DoSER’s associate program director.

“The point is that no matter what you believe personally as a scientist, there are ways you can engage positively with people of faith all around you that welcome them into science and don’t create unnecessary barriers,” Hinman said.

DoSER’s role is significant in AAAS diversity, equity, and inclusion efforts, both in and out of the organization. Several DoSER team members are active with the association’s staff-led Inclusion, Diversity, Equity, and Accessibility (IDEA) committee. “Engagement with religious communities can increase and support diversity in the sciences,” said Program Associate Lilah Sloane-Barrett, who also co-chairs the committee. “Some U.S. polls show that people in communities underrepresented in STEM fields identify as more religious than those already well-represented in the sciences,” she noted.

A strength of the DoSER program is that it does not “evaluate religious belief,” said Wiseman. “You don’t have to believe in everything that a faith community believes or practices in order to have a positive interaction and relationship regarding science.”

In symposia at the AAAS Annual Meeting, in its popular holiday lectures, and in the events that the program holds around the country, DoSER is continually searching for new ways to facilitate relationships between religious and scientific communities. But the “focus on building connections and longer-term relationships is what outlasts specific projects,” said Wiseman.

Forward Together: Where Science, Ethics, & Religion Intersect in a Changing World

The DoSER program actively supports scientists and science communicators in practicing inclusive and impactful engagement with the largely religious public.

Learn More
We use cookies on our website to give you the most relevant experience by remembering your preferences and repeat visits. By clicking “Accept All”, you consent to the use of ALL the cookies. However, you may visit "Cookie Settings" to provide a controlled consent.
Cookie SettingsAccept All
Manage consent