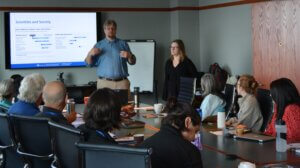 Many scientists regularly interact with the public in some capacity.  According to a 2015 Pew Research Center survey, most Americans identify as religious or spiritual. Religion, as a central element of culture and identity, informs many peoples’ views on science and technology topics. The Engaging Scientists and Faith Communities project draws on evidence-based practices and the science of science communication to help scientists develop strategies and skillsets for culturally and religiously inclusive public science engagement.

Through this project, led by Rob O’Malley and Rachel Kline, the DoSER program offers free resources and also holds workshops and other events at scientific society meetings and universities to help scientists inclusively and impactfully engage with diverse communities- especially communities of faith.

DoSER spoke with a diverse range of practicing scientists and science communicators about engagement activities with religious communities. These scholars span a range of backgrounds, career stages, research fields, and interests, but their engagement activities share some common themes – in particular being strategic, being respectful, and being human. Click here to read the profiles!

This booklet, made in collaboration with the AAAS Center for Public Engagement with Science and Technology, provides an overview of the science communication research, public perceptions of science, and strategies for encouraging fruitful dialogue about science and society. Download the booklet here.

The Engaging Scientists team, in collaboration with representatives from the AAAS Center for Public Engagement with Science and Technology, regularly hosts workshops and other events at scientific society meetings and university campuses. These events help scientists develop toolkits for respectful, culturally sensitive, and fruitful dialogue about science with diverse and largely religious publics. Watch the recordings here.

Host or Attend a Workshop

[Scientists] need to engage the public in a more open and honest, bi-directional dialogue about science and technology.

The Engaging Scientists in the Science and Religion Dialogue project was created in collaboration with the AAAS Center for Public Engagement with Science and Technology.

Scientists in Civic Life provides an overview of the science communication research, public perceptions of science, and strategies for encouraging…

In 2019, DoSER gave eighteen $1000 awards for ongoing or prospective science engagement efforts that focused on, or were inclusive…

Science Engagement and Dialogue with Faith Communities at UMBC

As part of the Engaging Scientists project, the University of Maryland – Baltimore County and the AAAS Dialogue on Science,…