In 2019, DoSER gave eighteen $1000 awards for ongoing or prospective science engagement efforts that focused on, or were inclusive of, faith communities.
6 minute read

This is a reposted article from AAAS News; read the original here.

In 2019 DoSER solicited proposals from faculty, staff, postdoctoral researchers and graduate students at each institution for public engagement activities focused on or inclusive of religious groups. Judges ultimately selected the 18 proposals to receive awards of $1,000 each to help bring a range of topics and outreach activities to life.

Recognition of public science engagement within faith communities through awards and the Public’s Choice contest is part of DoSER’s ongoing Engaging Scientists in the Science and Religion Dialogue initiative. In partnership with AAAS’ Center for Public Engagement with Science and Technology, the DoSER team developed a science communication workshop to support scientists in engaging more thoughtfully with religious audiences – after all, most Americans are religious, according to Pew Research Center surveys.

Scientific and religious communities have come together in classrooms, houses of worship and online through a number of inclusive outreach efforts supported by AAAS’ Dialogue on Science, Ethics and Religion program.

Consider a discussion held in a Baptist church about cancer treatment research. That outreach effort, one of 18 recognized by DoSER, was named the Public’s Choice winner on June 29 by an online vote. “Therapeutic Treatments for Cancer: Fostering a Dialogue Within a Faith Community” effort was led by Myeshia Shelby, a third-year graduate student at Howard University. 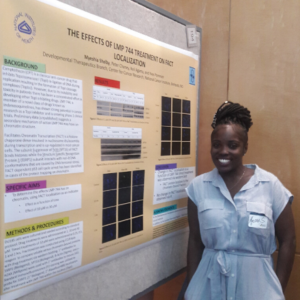 “The Public’s Choice competition is a way to bring more visibility to good public engagement activities.  We seek to highlight all the great things that people are doing and to demonstrate that AAAS sees this work as important and impactful,” said Rob O’Malley, the DoSER project director.

Recognition of such efforts through the awards and the Public’s Choice contest is part of DoSER’s ongoing Engaging Scientists in the Science and Religion Dialogue initiative. In partnership with AAAS’ Center for Public Engagement with Science and Technology, the DoSER team developed a science communication workshop to support scientists in engaging more thoughtfully with religious audiences – after all, most Americans are religious, according to Pew Research Center surveys.

In conjunction with the university events, DoSER solicited proposals from faculty, staff, postdoctoral researchers and graduate students at each institution for public engagement activities focused on or inclusive of religious groups.

The proposals were vetted by DoSER staff, Public Engagement staff and scholars from the host university to ensure the proposals were specific, realistic and grounded in the science of effective science communication and engagement, said O’Malley. Judges ultimately selected the 18 proposals to receive awards of $1,000 each to help bring a range of topics and outreach activities to life.

Through the awards, DoSER is doing its part to spur public engagement activities, which scientists and institutions often recognize as important and necessary but which are not always formally incentivized in STEM fields, said O’Malley.

Many of the successful projects recognized that faith and scientific communities are not discrete groups but overlapping communities. More than one-third of the scientists surveyed claim a religious affiliation, a survey conducted in 2011 and 2012 found.

The Public Choice winner, for instance, emerges from both the scientific and religious communities. For her winning project, Shelby hosted the discussion about cancer therapeutics at Mount Hebron Baptist Church in Houston, Texas, where her roots run deep – she was baptized there, and her godfather is the pastor.

There is sometimes a “schism” between scientific and religious outlooks on medicine, Shelby noted, with each side skeptical of the other’s approaches to healing. Research-based treatments are seen as rigorous and vetted by scientists, while some churches and faith communities see such treatments as chemical and foreign – “things that disrupt the spiritual person that they are,” said Shelby. To bridge this schism, Shelby shared her research on cancer treatments, specifically therapeutic interventions that inhibit cell proliferation during metastatic stages of cancer.

“I am a part of the greater community of the church, and for them to see what I was doing in the lab, it really was of interest to them,” Shelby said.

The event, held in the spring of 2019, was not a one-sided lecture but a “dinner table conversation,” said Shelby. Parishioners shared their questions and concerns over a meal, raising questions about the safety of cancer research and sharing their fears about medical experimentation and being a “guinea pig.” Shelby noted that such fears are deep-seated for many Black Americans aware, for instance, of Henrietta Lacks, whose cells were captured without her consent and continue to be used in research long after her death. Yet Shelby’s event helped open the door to further discussion among attendees about the benefits and risks of cancer treatments, she said.

Leaders at Shelby’s church were open and cooperative to her discussion, she noted. Award recipients were required to demonstrate community buy-in as part of their proposal.  Applicants submitted a letter from a faith community leader with whom they would be collaborating on the project.

Michael Hamburger, professor of geophysics at Indiana University, and Adrienne Keller, an Indiana University Ph.D. candidate in ecology, worked with Bob Whitaker, lead pastor at the Evangelical Community Church in Bloomington. The trio planned a series of workshops centered on the scientific, ethical, and religious dimensions of climate change and environmental stewardship. 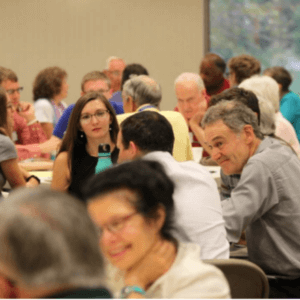 Michael Hamburger, right, takes part in a small-group discussion during a workshop he planned with the support of DoSER. | Lynne Snyder

“It became a discussion of how we bring our various communities together in a meaningful way using our different areas of expertise and our different perspectives,” said Keller.

The workshops brought together members of the university’s scientific community with leaders and members of five different area evangelical congregations for small-group discussions on religious and scientific views of climate change and environmental stewardship. The final workshop joined the two perspectives at a nearby state park to discuss the spiritual and scientific aspects of their natural setting.

Said Hamburger, “These are the two most powerful forces in the modern world: religion and science, and together they can turn the world around. This is a place where we’ve got to find some common ground, and we’ve got to start locally.”

Having grown out of university workshops, many of the projects supported by DoSER focused on fostering dialogue among students.

Award recipient Esohe Irabor, a doctoral student at Howard University, partnered with the university’s Muslim Student Association for a presentation of research on the physiological, emotional and psychological benefits of the Muslim prayer practice of Salat, during which one stands, bows, kneels prostrate and sits in sequence. The presentation was followed by a wide-ranging discussion that cleared misconceptions about Islam, Irabor said, noting that the event was a learning experience for her, too, as she comes from a Christian background.

Another award recipient, Mercedes Burns, an assistant professor in the Department of Biology at the University of Maryland Baltimore County, wanted to ensure her lesson on the origins of evolutionary thought included current perceptions of evolution. She devoted a class to religious perspectives on evolution, inviting a Lutheran pastor from the campus ministry to answer student questions.

Other award recipients noted that outreach efforts like those supported by DoSER can help bridge the gaps between scientific and religious communities by changing perceptions of what a scientist looks like.

Shelby noted that Black women like her are underrepresented in the sciences, but not for lack of interest, as many of the attendees of her discussion on cancer therapeutics at her church were young women.

As a member of a scientific and a faith community, Shelby showed young women present that science is available to them. She said, “That was really important for them to see someone who looked like them.”

Scientists in Civic Life provides an overview of the science communication research, public perceptions of science, and strategies for encouraging…

Regardless of whether they spend their days in the classroom or at a lab bench, scientists interact with the public…