DoSER celebrates its 25th anniversary by bringing together scientists and communities of faith to discuss the up-and-coming hot topics in science.
6 minute read

This is a reposted article from the National Catholic Reporter; read the original here. 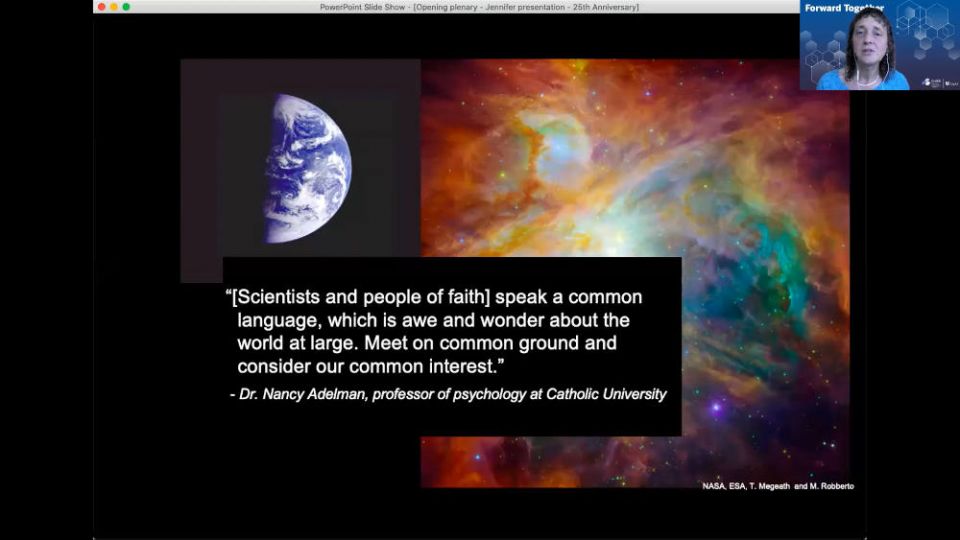 “If scientists are really going to be effective at serving society with science, we need to recognize that religious faith is an important part of most people’s worldview and their identity,” Jennifer Wiseman, an astrophysicist with NASA and director of the Dialogue on Science, Ethics & Religion program of American Association for the Advancement of Science, said at an online symposium on science and religion June 15. (NCR screenshot)

Ever since she was young, Nalini Nadkarni has loved trees.

As a kid, she spent days climbing them, and she swore an oath to herself that as a grownup she would do what she could to protect them. Today, Nadkarni is a biology professor at the University of Utah who for 35 years has studied rainforest canopies and, true to her childhood promise, has done what she can to raise awareness about the values of trees and why their preservation matters to everyone.

That mission has led her to speak with corporations, youth and the incarcerated, as well as many faith communities.

“I chose to engage faith-based groups because nearly 85% of all humans self-identify as being religious, which is a much larger proportion than those who are scientists and conservationists,” she said during an opening session at an online symposium on science, religion and ethics hosted by the American Association for the Advancement of Science, the world’s largest general scientific society and the publisher of Science magazine.

The June 15 virtual gathering was held to mark the 25th anniversary of the association’s Dialogue on Science, Ethics, & Religion, a milestone reached in 2020. The program, often called DoSER, has sought to foster engagement among scientists and people of faith to not only show how science relates to people’s lives but also to further science, and trust in it, in ways that benefit all people.

The half-day conference demonstrated the connections across religion and science in a series of panels that discussed topics like evolution, climate change, public health, genetics, racial justice and artificial intelligence.

“If scientists are really going to be effective at serving society with science, we need to recognize that religious faith is an important part of most people’s worldview and their identity,” said Jennifer Wiseman, a senior astrophysicist at NASA who for 11 years has served as director of the American Association for the Advancement of Science’s religion and science program.

Worldwide, 84% of people affiliate with a religious group, according to a 2015 analysis by the Pew Research Center. Approximately 72% of American adults identify as part of some religious tradition, per Pew, and even as affiliation with organized religion has declined, nearly half of Americans say that religion remains an important part of their lives.

Wiseman said it is important for scientists to recognize the way faith has shaped values and worldviews, which in turn affect the ways many people encounter, experience and use science and technology in their daily lives.

The Dialogue on Science, Ethics, & Religion program has worked to bridge gaps between faith and science. Its Science for Seminaries project helps incorporate science into educational curricula for future clergy. Other projects have aimed to help scientists become familiar with engaging faith communities, and to bring both groups together in six cities to talk and address underlying perceptions they have of one another.

One common misassumption, Wiseman said, is that only religious communities benefit from engaging with scientists. But she sees it as a true “two-way dialogue,” where religious communities hear about cutting-edge science and technology that can improve their ministries, and scientists learn how their work “actually impacts people’s lives.”

“Scientists gain a lot by talking to faith communities,” she said.

The idea that science and religion are incompatible or in conflict has long persisted. In some ways, that has been reinforced by the coronavirus pandemic, as evangelical Christians have been among the groups most skeptical of vaccines. But the pandemic has also demonstrated the benefit of science and religion working together, said Katy Hinman, DoSER associate director, with religious leaders in some cases becoming critical communicators of public health guidelines.

“I think together scientists and faith communities can make science be as effective as it possibly can be in helping make our world a better place,” Wiseman said.

One of those ways has been in the areas of the environment and climate change.

In the wake of the 2004 tsunami that wreaked destruction across Indonesia, Nana Firman directed the World Wildlife Fund’s “green reconstruction” efforts that included replanting mangroves in coastal areas. She quickly became frustrated when local communities, many of whom were devout Muslims, didn’t respond to science-based rationales for coastal conservation.

It wasn’t until a friend suggested that Firman try to incorporate Islamic teaching into her messaging that she began to make inroads. She revisited the Quran and other Muslim teachings, and discovered a passage where the prophet Muhammad advised his followers if they are holding a sapling when the Resurrection comes to still take the time to plant it. That and other teachings resonated with the communities, who began to view re-greening efforts as part of their faith tradition.

“I’m a practicing Muslim, and I care about the environment, but I did not put one and one together until that time,” said Firman, who now serves as a senior ambassador for the multifaith climate organization GreenFaith.

Nadkarni said it is important for scientists to approach interactions with faith communities, or any groups, with “intellectual humility,” that is, to seek to learn and listen as much as impart their own knowledge.

In her work, that has meant spending time studying the religious values of trees. Her research found references to trees in many religions’ holy texts, with more than 300 references to “trees” and “forests” in the Old Testament alone. In addition, there were religious rituals around trees, such as the Jewish holiday of Tu B’shevat, the “new year of the trees.”

“Trees hold values in many sectors other than science. They have spiritual values, aesthetic values, economic and medicinal values,” she said.

Nadkarni has presented on trees and spirituality for more than 40 houses of worship and seminaries, and arranged for the Mormon Tabernacle Choir to perform songs about nature at the annual meeting of the Ecological Society of America last year. Looking ahead, she plans to discuss environmental justice with the archbishop of Canterbury, and hopes to partner with churches and seminaries to do citizen science projects around ecological monitoring.

Those types of engagements have helped Nadkarni see commonalities among scientists and people of faith, such as a shared sense of curiosity about the world, where we come from and concern about nature.

“Both want to answer important questions about who we are, how did we originate, where did the universe start and how should we behave with each other,” she said.

J. Marshall Shepherd, a climate scientist and director of the atmospheric sciences program at the University of Georgia, was part of a team of scientists at the school that collaborated with the Atlanta Archdiocese to create an environmental action plan to provide Catholics with tangible ways to live out Pope Francis’ 2015 encyclical “Laudato Si’, on Care for Our Common Home.”

To Shepherd, a recent inductee to the National Academy of Sciences, the project was “just one more way for me to sort of help break down this perceived barrier or wall between faith- and religious-based activities and those activities around science.”

He said it was important for scientists to avoid an “ivory tower” mentality and instead approach knowledge as a coproduction where everyone can contribute.

“You have to engage with these communities on an even playing field, on level ground and from a shared and common value system,” he said.

Identifying shared values can help lessen mistrust, he added. “We breathe the same air. We drink the same water. No matter what faith we claim or adhere to, we have one planet.”

Shepherd, who is Christian, said part of his optimism around addressing climate change comes from the work of religious groups like Interfaith Power & Light that are often leaders in raising awareness around climate and environmental issues.

Firman of GreenFaith said she has sensed in the past 15 years more faith communities exploring issues of climate and environmental justice, and pointed to efforts like Green Ramadan celebrations and greening houses of worship as ways religious communities are not just talking about it but trying to do something, too.

“Science has explained the how” of climate change, she said, “but the faith explains the why. So we need both.”

Regardless of whether they spend their days in the classroom or at a lab bench, scientists interact with the public…