On February 10, 2021, DoSER hosted a AAAS Annual Meeting session that explored how scientific tools have supported the revitalization and reclamation of culture, heritage, and identity for communities of African descent.
View the recorded session
6 minute read
Save to my list
Download as PDF

“Far too often…science has not only silenced but oppressed [African American] communities,” said Rev. Dr. Robert R. A. Turner, the pastor of the Historic Vernon A.M.E. Church in Tulsa, Oklahoma, and the respondent at a scientific session at the virtual 2021 AAAS Annual Meeting.

On February 10, 2021, the American Association for the Advancement of Science (AAAS) Dialogue on Science, Ethics, and Religion (DoSER) program hosted the session “The Dynamic Past: How Science Helps Give Voice to Silenced Stories.” Featuring presentations by and discussion with Black scholars and community representatives, the event detailed how modern scientific tools, coupled with historical and cultural understandings, are helping to uncover the silenced stories of communities of African descent in support of reclaiming and revitalizing their culture, heritage, and identity.

Ms. Joycelyn Davis, Community Engagement Officer of Africatown-C.H.E.S.S. and a co-founder of the Clotilda Descendants Association, told the story of the people brought to America in 1860 on the Clotilda, the last known slave ship to make the voyage from Africa. Since the import of enslaved people from Africa was illegal at the time, the owner burned the ship to conceal his crime. Davis explained how, after the end of the Civil War, these resilient individuals and their families formed Africatown, just north of downtown Mobile. Over time, the town grew into a thriving, self-sustaining community.

More recently, however, “Africatown has seen some struggles,” explained Davis. “Over the years, businesses [were] shutting down, and heavy industry surrounded the area, leaving certain illnesses that affected the community.”

An opportunity for revival appeared in 2019, when archaeologists, working with historians and other experts, discovered the remains of the Clotilda in the mud of the Mobile River north of Africatown. The identity of the ship was confirmed through careful analyses of the wood and metal artifacts recovered from the wreck, and imaging techniques to reconstruct key diagnostic details of the vessel’s size and shape. “My hope, with all the attention from the finding of the Clotilda, is that the community grows by revitalization, economic growth, strengthening our schools, and making Africatown a tourist attraction,” Davis said. 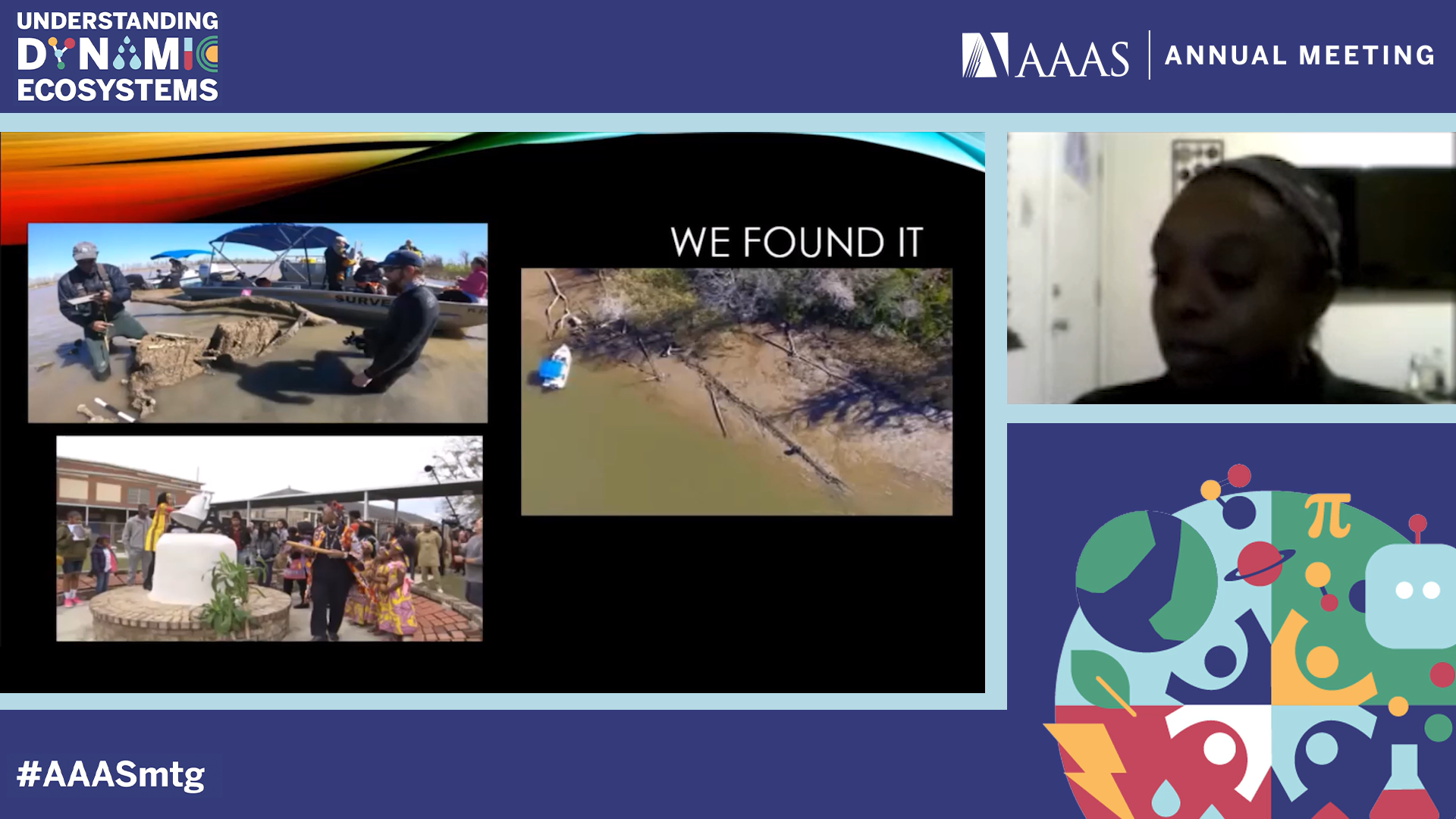 Ms. Joycelyn Davis discussing the recent discovery of the remnants of the Clotilda. | McKenzie Prillaman/AAAS DoSER

Dr. Whitney Battle-Baptiste, an archeologist at the University of Massachusetts at Amherst, also shared how archaeologists working with scholars in other fields could provide insights into the lives of enslaved and emancipated people. She discussed findings in the 1990s from two archaeological sites: the Levi Jordan Plantation in Brazoria, Texas and the Charles Carroll House in Annapolis, Maryland.

At the Levi Jordan Plantation, emancipated Africans were forced to leave their quarters in a rush in the late 1890s, leaving behind a wide array of items in their places of use. Some artifacts found by archaeologists 100 years later include cast iron kettle bases, small bird skulls, ocean shells, and knives, all of which were recovered in proximity.

“As someone who is not only an archaeologist of African descent but also someone who grew up practicing an African traditional religion, for me, hearing about these particular items was interesting,” said Battle-Baptiste. “But it was the placement of these items that was so influential for me and so telling. Because for me, in my house, I grew up with these same objects in a cast iron pot.” 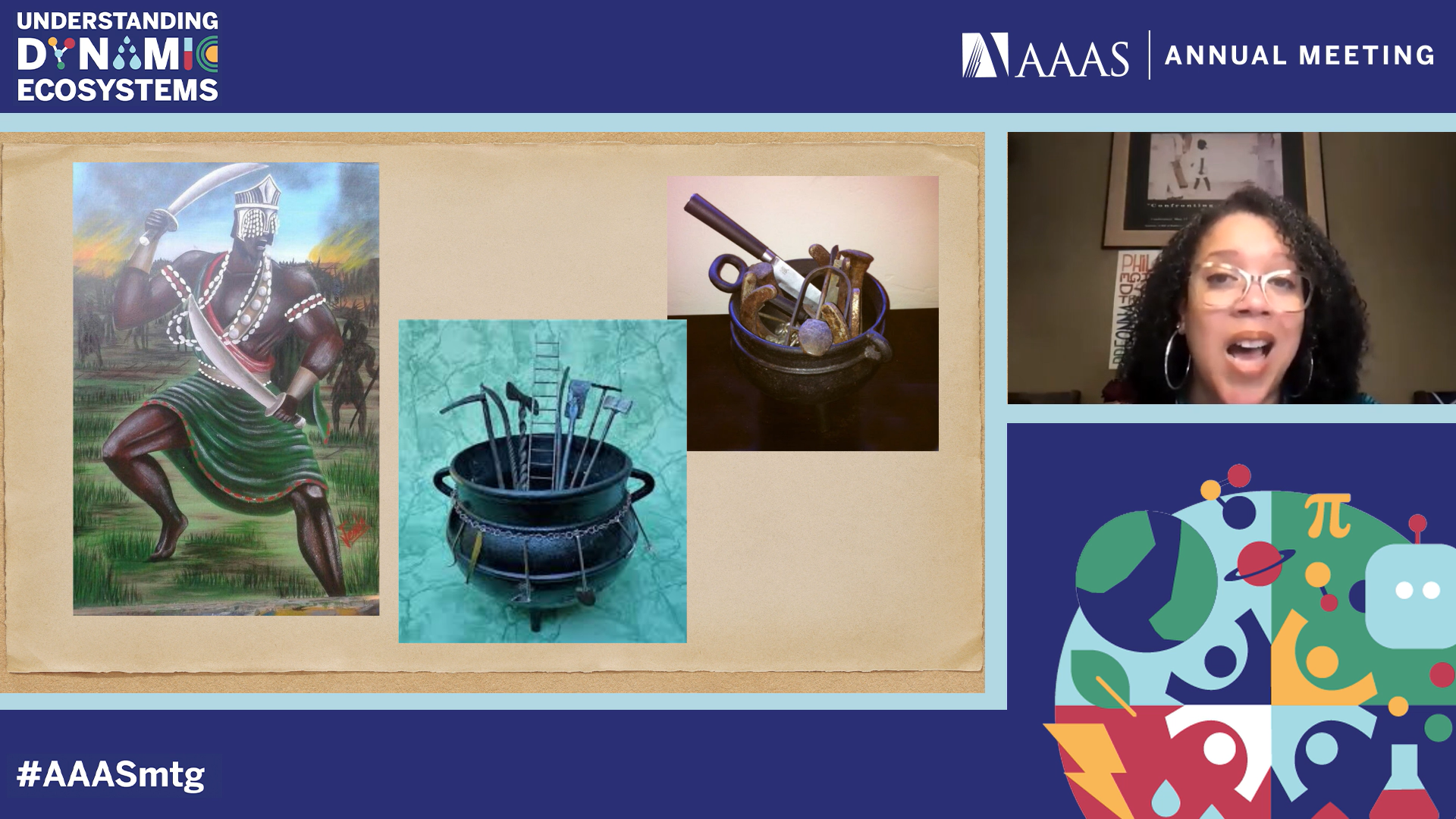 Similarly, at the Charles Carroll House, archeologists discovered items including quartz crystals, pierced discs, and pins inside the kitchen wall of the main house. Lead archeologist Dr. Mark Leone had no idea what to make of the assemblage, but learned from Dr. Frederick Lamp, a curator of African art, that the materials were traditionally used in West Africa to direct spirits. To discover how these items were used in peoples’ lives at the Carroll House, Leone worked with folklorist Dr. Gladys-Marie Fry to survey narrative information from formerly enslaved people on the practices and meanings associated with conjuring and doctoring. “The narratives reveal what is missing from the archaeology and what to look for in the ground because there’s a lot of materials that would not have lasted for this long,” said Battle-Baptiste.

Narratives and cultural context are also important to the work of Dr. Jada Benn Torres, a genetic anthropologist at Vanderbilt University, who studies patterns of genetic diversity among Caribbean populations, and how ancestry influences the lived experiences of community members there.

“My use of genetic data is really intended to add novel perspectives to our understandings of how communities came to be how they are,” she emphasized. “Some of the history of the region has been lost to time or as a result of systemic marginalization, in which both African descendants and Indigenous Caribbean populations were written out of history.” 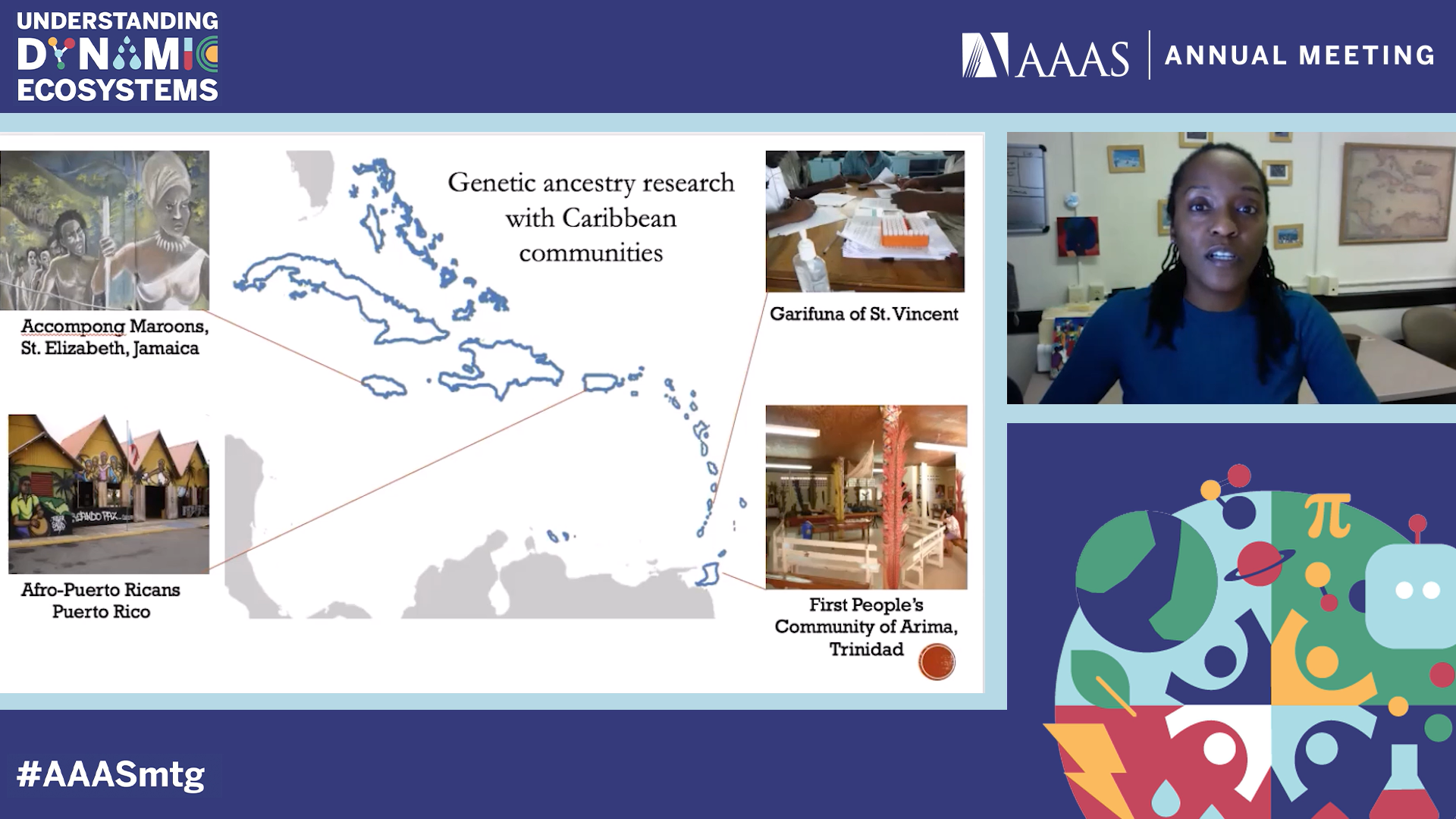 Dr. Jada Benn Torres explaining her genetic ancestry research and the Caribbean communities she has worked with. | McKenzie Prillaman/AAAS DoSER

Benn Torres explained that with genetic ancestry tests, the test taker’s DNA is compared to the DNA of people with known ancestry to find an ancestry estimate. While useful for learning about population demographics, biogeographic origins, and relationships of past populations as reflected in patterns of genetic variation in modern-day groups, any findings must be understood with numerous caveats. For example, genetic ancestry may have little or nothing to do with how one was socialized and the communities one identifies with. “As I see it, the real utility of using genetic ancestry tests in this manner is that it can be informative about how biology and culture work together to shape human experience,” concluded Benn Torres.

During the group discussion, panelists highlighted how contributions from non-scientists are vital to their work. Benn Torres said, “I’m most excited when community members want to participate or approach me in doing research projects…For me, it’s these sorts of questions that bubble up from the community that are the most interesting to look at.”

Battle-Baptiste also recognized the importance of community voices in her field of study. While working at Andrew Jackson’s Hermitage in Tennessee as an early-career archeologist, she realized that she needed to connect with the local Black community to understand how the past influenced today’s perception of the place. “The connections of a place that has this historical idea of what it was and the reality of what archaeology is teaching us is slightly different,” explained Battle-Baptiste. “So, I think it’s interesting that non-archeologists, to me, have an essential role for us to understand…I need to understand the context of how this place is [viewed] within the Black community there. Without that community connection, I don’t even understand…how my interpretation impact[s] the place where people are still living.” 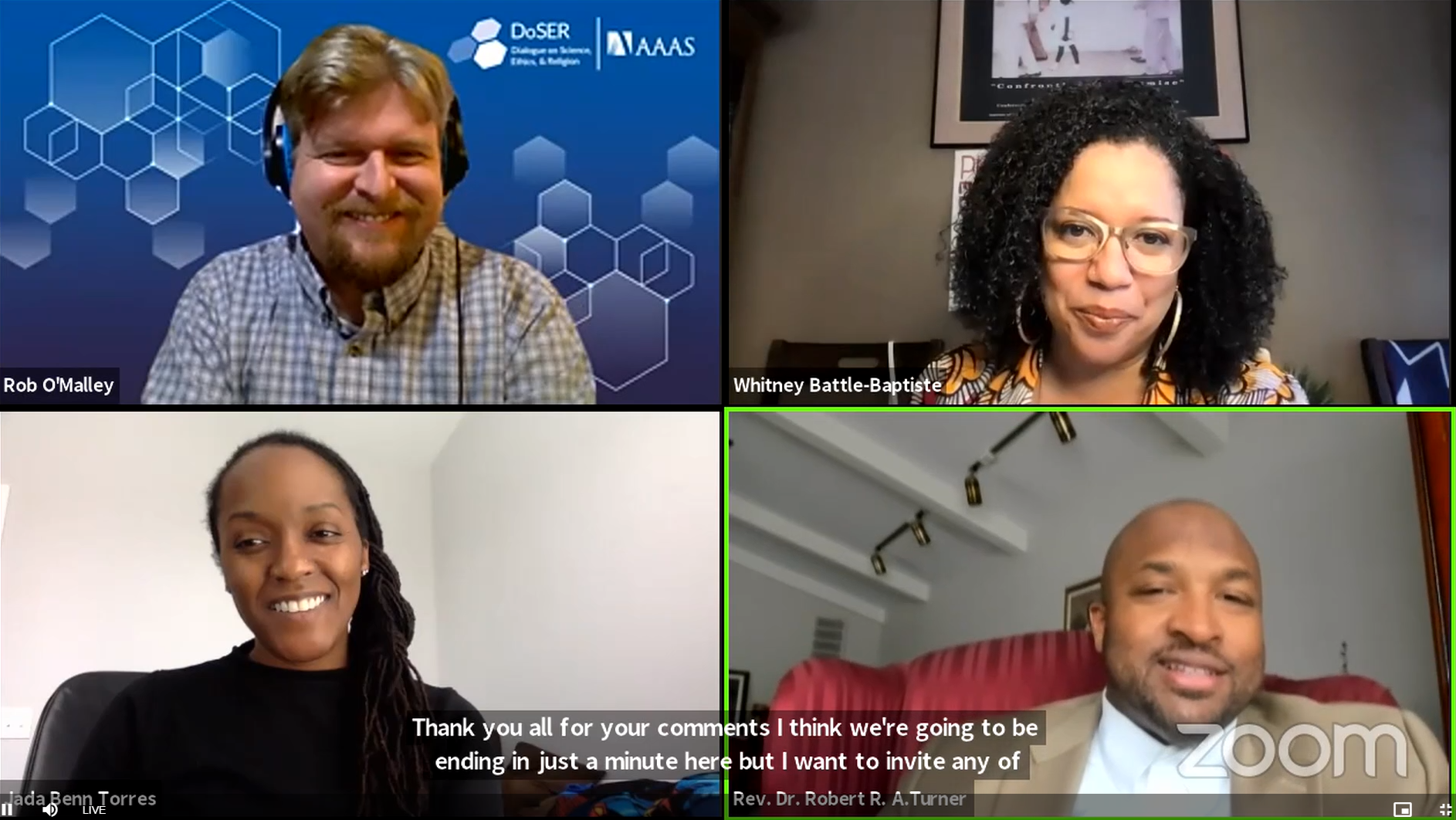 Unfortunately, there is still often a disconnect between scientific work and community wishes. Respondent Rev. Turner added a community representative perspective to the conversation as pastor of the Historic Vernon A.M.E. Church, the only edifice on Greenwood Avenue that was there prior to the 1921 Tulsa Race Massacre. He spoke about his experiences collaborating with scientists and government officials in an ongoing effort to exhume bodies from suspected mass graves of victims from that infamous event. “It’s important, [when scientists] interact with people, not to be condescending [or] speak down to folks when they’re simply trying to raise questions,” he explained. “They shouldn’t treat it as a mere scientific experiment. This is a family, community, societal struggle, and history.”

Click here to view the recording of “The Dynamic Past: How Science Helps Give Voice to Silenced Stories.”

The Dynamic Past: How Science Helps Give Voice to Silenced Stories

This session explores how tools of science, including new technologies, techniques, and collaborations in a variety of fields have supported…

DoSER hosted a session on "Pursuing Environmental Justice through Science and Religion" at the 2021 AAAS Annual Meeting. It focused…

This session explores research and engagement projects led by Native American and Indigenous scholars working in diverse ethical, scientific, and…