DoSER is devoted to fostering scientific engagement with and within faith communities. We have numerous projects that help equip faith leaders with the knowledge they need to confidently discuss scientific issues.
2 minute read
Download as PDF 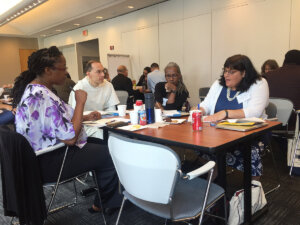 Science and technology affect nearly every aspect of our modern lives. A significant portion of citizens seek guidance on such issues from a trusted religious leader. However, many pastors and religious leaders feel unprepared to discuss science because, in many cases, their own experience with science has been limited. They may not have encountered science in their theological education, nor do they have reliable sources for current scientific information scoped for their needs.

This project supports seminaries in their efforts to incorporate forefront science into their core curricula and to prepare future clergy to address questions of science, ethics, and religion with their congregations. Integrating science into seminary education will not only benefit professors and students, but ultimately it will enrich those in the pews who are interested in the discoveries and implications of science. The project is currently in its second phase. Click here to read the report from the first phase.

Science in Continuing Education for Pastors

This pilot project aimed to increase religious leaders’ engagement with science so they felt comfortable discussing scientific topics and issues with their congregants. Building on the Science for Seminaries project, this project integrated scientific and technological topics that are relevant to contemporary pastoral ministry into continuing education resources at four seminaries. Read the report here.

This pilot project was built on the Science for Seminaries project by fostering a science program in rabbinic education, thereby broadening the scope of religious communities reached by the project. Partnering with Sinai and Synapses, DoSER supported Jewish educational institutions as they worked to nurture productive dialogue and community engagement with science, and built momentum for increased involvement at the science-Judaism interface at Jewish institutions.

I was so glad to see a program that recognized that there is a potential connection between science and faith.