Science fiction is the medium we can use to make thought experiments – to test ideas of how we live and how we ought to be living with each other, said Brother Guy Consolmagno, Director of the Vatican Observatory, during a virtual discussion on 9 December 2020.

More than 200 attendees gathered online for the holiday lecture and discussion “Imagining Different Worlds: Science, Ethics, and Faith in Science Fiction” about how science, ethics, and faith in imagined words might inform humanity’s present and future. The event, which featured Consolmagno and Dr. Nnedi Okorafor, an award-winning science fiction and fantasy author, was hosted by the American Association for the Advancement of Science (AAAS) Dialogue on Science, Ethics, and Religion (DoSER) program.

Consolmagno opened the discussion by proudly stating, “Science fiction made me a scientist.”

He revealed that as an undergraduate, he chose to enter the Department of Earth and Planetary Sciences because planets were places of adventure for the characters in his favorite science fiction books. “When I got there, I discovered it was the geology department. What could be more boring than geology, staring at rocks?” Consolmagno recalled. “Except that I discovered that there are rocks that fall out of the sky from outer space, from the asteroid belt, and as we now know, even from some planets.”

“You can actually hold space in your hands – they’re called meteorites,” he said. “I have been passionate about meteorites ever since.”

Unlike Consolmagno, Okorafor had not been a science fiction fan since childhood. “Whenever I would pick up a science fiction novel, it just had this feeling of not being accessible to me,” she said. “I needed to feel like there was a possibility that I would exist in those worlds, and I did not feel that way.”

Instead, when she began writing creatively at age 20, Okorafor first turned to “the seamless blend of true, existing African spiritualities and cosmologies with the imaginative,” a subcategory of fantasy that she named Africanjujuism.

She told how this concept came from childhood trips to Nigeria with her family, where she and her siblings learned about and were captivated by their culture. “I started learning about various Igbo cosmologies and mythologies and cultural things that were fascinating to me…Once I started writing, those things came forth immediately.” 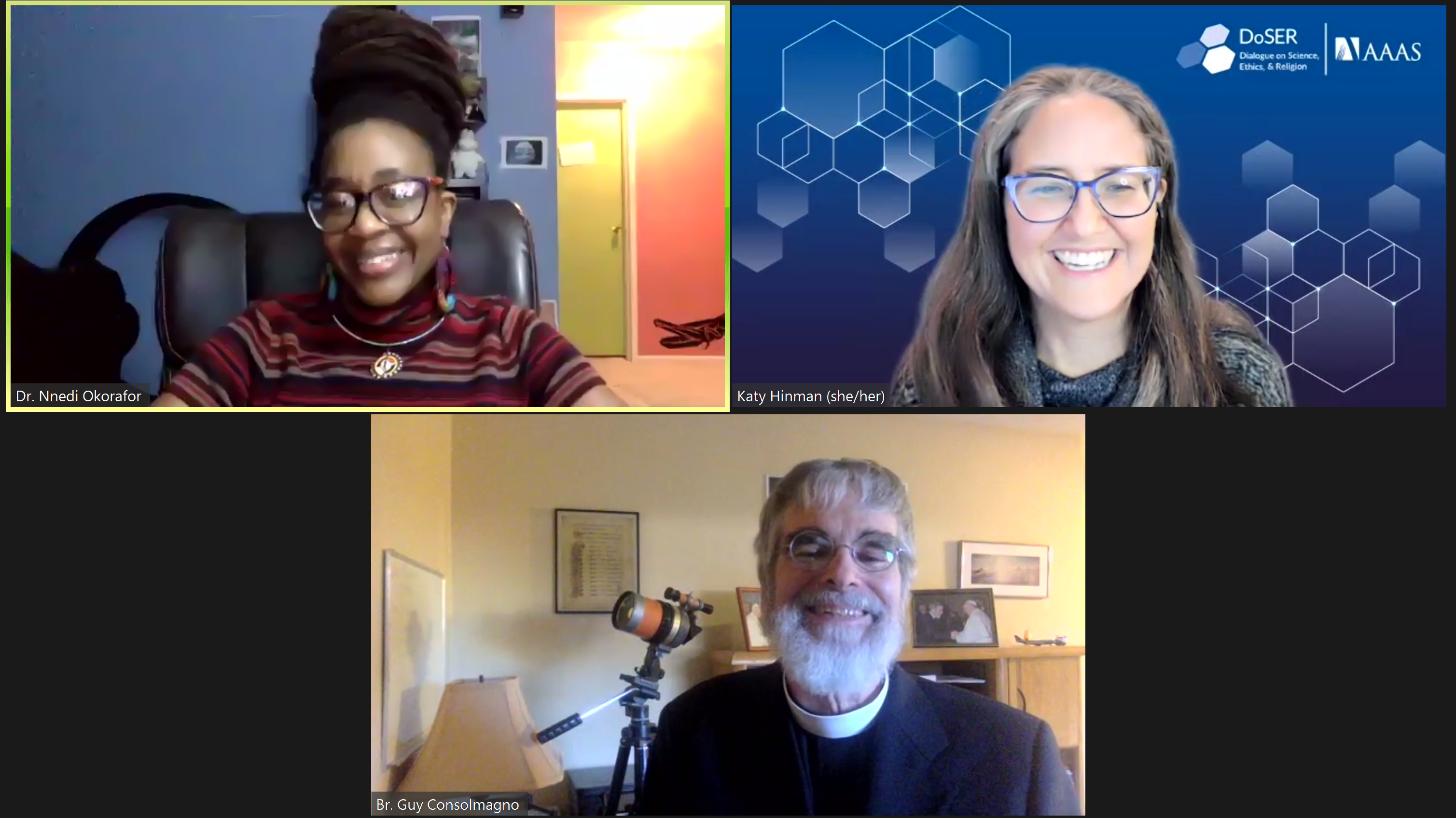 Consolmagno also demonstrated the links between science and speculative fiction by relating science fiction to the cosmological principle, an understanding in astronomy that the rules of physics and chemistry on Earth are the same as on the moon, stars, other planets, and even in other galaxies. “That principle allows us to use our science to understand the physical universe,” he explained.

Such transferable rules apply to beings, both living and fictional, as well.

“If we have interesting creatures – creatures with intellect and free will, creatures who are aware that they exist and that you exist, and that can make choices about whether to steal your food or offer you food, to do good or to do evil – that also is a cosmological principle that allows science fiction to occur,” Consolmagno said, describing how characters in science fiction can be used to explore human morality.

“But science fiction is also a time traveler. Science fiction read today written in the past is going to be encountered in a way very different from what the author may have intended,” he explained. “That, too, allows us to be time travelers going into the past.”

Time travel is also a prevalent theme in Okorafor’s works. She explores it by writing Africanfuturism, a subcategory of science fiction that is “concerned with visions of the future, is interested in technology, leaves the Earth, skews optimistic, is centered on and predominantly written by people of African descent (Black people), and is rooted first and foremost in Africa.”

Okorafor elaborated that this genre arose during visits to her parents’ ancestral villages in Nigeria. She noticed how cellphones began impacting traditional ways of life. Women carrying water on their heads would now hold their cellphones away to prevent them from getting wet, and men climbing trees using leather belts to collect sap for palm wine would now lean back to talk on their cellphones.

“This place that has these super modern homes that don’t have running water or electricity…and these cellphones that are just everything. What would these places be like in the future?” she wondered. “That’s what led me to start writing this Africanfuturism. I wanted to see it, I wanted to explore it.”

Okorafor often combines both Africanjujuism and Africanfuturism in her books. She explained that “traditionally, in the West, there is a belief that science fiction and fantasy are supposed to be separate…the mystical and magical cannot be in a science fiction narrative. [But] if you look at African worldviews, the idea of the magical and the mystical coexist with the mundane.”

She said, “If you take this way of thinking, then you move that into the future, you are going to have science fiction that naturally has these elements [of magic and mysticism] within that are not conflicting with themselves.”

To learn more about the 2020 holiday lecture and view the recording, click here.