Home Resources How To Strengthen Our Connections to the Natural World

How To Strengthen Our Connections to the Natural World

How can people strengthen their connections to natural world? That was the question addressed during the 2021 December Dialogues with Drew Lanham and Sevim Kalyoncu.
5 minute read
Save to my list
Download as PDF

This is a reposted article from AAAS News, written by Zaid Jilani. Read the original here. 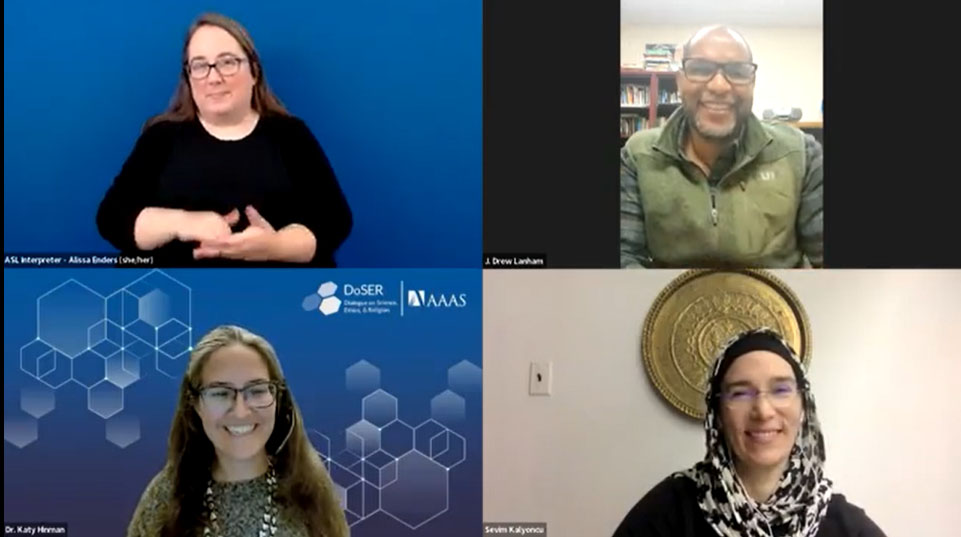 How can people strengthen their connections to natural world? That was the question addressed during this year’s December Dialogues, an event hosted by the Dialogue on Science Ethics, & Religion (DoSER) program of the American Association for the Advancement of Science (AAAS).

AAAS CEO Dr. Sudip Parikh opened the event by emphasizing the importance of these dialogues. “I hope as you think about your kinship with nature and with the land around you,” he said; “step back and think about the broader conversation that is necessary, required, and frankly so pivotal in this moment in terms of the conversation among scientists, ethicists, and our faith communities. We want to make sure we’re building those bridges, and this is one part of it.”

Lanham, an avid birder, began his remarks by describing how his interest in birdwatching grew. He described his childhood watching birds with a quote from his poetry. “Looking skyward, wishing to be the winged things I saw soaring…entranced by the redtail hawk, I was free,” he said. “Suddenly free from chopping the wood to feed my grandmother’s hungry heater and her hot stove.….No longer bound to schoolbooks or homework or other little Black boys challenging my Blackness, or other little white boys despising it. I would float wingtip to wingtip in weightless kinship with the hawk.”

Lanham went on to become a certified wildlife ecologist and a prolific author, writing powerfully about ornithology, conservation, and engaging in a space that is not always welcoming. In 2017, he published The Home Place: Memoirs of a Colored Man’s Love Affair With Nature, which won the 2017 Southern Book Prize and the Reed Award from the Southern Environmental Law Center. As he shared during his introduction, “all these years, all these degrees, all of this love forwarded to now; yes, that is me. Black boy wishing to Black man being, but still wishing to be the red-tailed hawk. It is who I am – a wild wandering soul.”

Kalyoncu then explained how she became interested in environmentalism. Like Lanham, she was fond of nature as a child. “As an only child I would just go out and play in the woods,” she said. “I would explore, I would find plants and animals, that whole experience for me turned into something deeply spiritual. When I was out in nature I felt surrounded by beauty and love and balance and I was at peace in my heart.”

After becoming a mother, Kalyoncu felt like she needed to get involved in environmental work to ensure her daughter would get the same access to a healthy ecosystem and have the opportunity to develop a relationship with God in the same way Kalyoncu did as a child. As she described, “I wanted my child to connect her faith with caring for nature.” As Executive Director of Green Muslims, she works to encourage Muslims to embrace protecting the earth as a tenet of their faith. She is also a certified master naturalist and works with general youth audiences to better understand the natural world at a local and community level.

Both Lanham and Kalyoncu agreed that connecting to nature helps us as humans see our commonality with all of creation. “This whole idea of oneness, of unity, of… transcendence and this convergence I think is so important,” Lanham emphasized.

During the Q&A, Hinman asked the speakers to address how we can create more opportunities to connect with the natural world, particularly when it comes to overcoming barriers that people from minority groups face.

Kalyoncu suggested that providing structure and support is important. “Some people really need the support of others to get out there. Sometimes taking a whole community – even if it’s just a small group – out in nature….can make it more comfortable for people.” She also recognized financial means as a barrier to visiting the natural world. “These groups also have to provide the way for people to get out from the city to the mountains, for example.” However, people don’t need to travel far to appreciate the natural world. Kalyoncu pointed out that nature is “not just ‘unpeopled space.’ Being able to pick a dandelion [in your front lawn] and learn that you can eat that, and then getting into deeper conversations, is an amazing topic that can bring people together.” Lanham recommended that conservationists focus on “our ties to nature through the food we eat, the water we drink, and the air we breathe…That’s a connection to nature that we need to make sure we are constantly enforcing.”

Another question posed during the Q&A concerned the false yet prevalent dichotomy of science and religion. When the panelists were asked if they had ever experienced people interpreting their spiritual and artistic connections with nature as being anti-scientific, Lanham gave an emphatic yes, noting that people often question what they don’t understand.

“So when I’m constantly pulling [examples] from what I learned from my grandmother or what I experienced sitting on the hard pews in the Baptist church” and using that knowledge in concert with knowledge about ornithology and wildlife conservation, “people question that,” he said. In reference to his writing and art, he said “people want to see that as soft…How can you analyze that data? But it’s data nonetheless.” Kalyoncu responded, “I’ve avoided that problem by being a lay person, honestly. I feel comfortable telling people this is just my beliefs, you can see it however you want.” But she also agrees how important it is to bring faith, science and art together in one conversation. “We all like to place ourselves into groups, into boxes. When those boxes overlap, it becomes a bit awkward, maybe uncomfortable. But I think amazing things result.”

“Our Connections to the Land Run Deep”: Belonging and Kinship with Nature

A Climate of Hope: Scientists and Faith Communities Addressing the Climate Crisis