Home Resources DoSER Breaks Down Walls Between Science and Religion

DoSER Breaks Down Walls Between Science and Religion

“If you look back far enough, you see people who are happily doing religion and science side by side for thousands of years."
4 minute read
Save to my list
Download as PDF

This is a reposted article from AAAS Membership; read the original here.

Throughout history, dramatic clashes between scientific visionaries and religious figureheads have propagated the image of a “war” between the two schools of thought. For centuries, however, these seemingly strange bedfellows coexisted as independent bodies of knowledge unified under the same basic human need to understand the universe and our place in it.

“If you look back far enough, you see people who are happily doing religion and science side by side for thousands of years,” says John P. Slattery, Ph.D., a senior program associate for the Dialogue on Science, Ethics and Religion (DoSER). 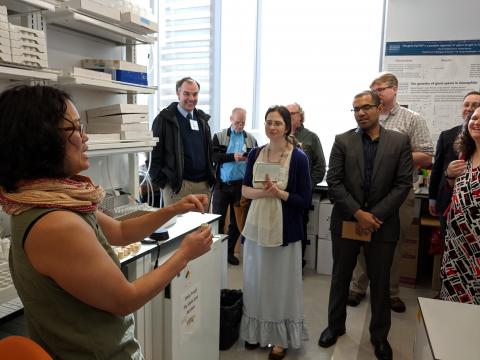 DoSER is developing resources to help scientists address the religious and ethical questions related to their work.

AAAS established DoSER in 1995 to facilitate communication between scientific and religious communities. The program builds on the AAAS mission to “advance science and serve society” by accounting for a vast cultural context in which science operates.

“The majority of people in the world today identify as religious. That’s simply a fact,” says Slattery. “To do successful science engagement, you have to understand the culture and place from which people are coming.”

Slattery – a published author and scholar on the intersection of science and religion – co-manages DoSER’s Science for Seminaries initiative. The project provides funding to help seminaries integrate science into their curricula – “engaging the engagers,” he says. To date, the program has reached 54 seminaries across the U.S. and Canada. 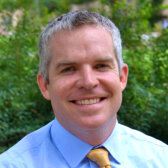 Grants from the initiative aim to equip religious leaders with the tools needed to advise their congregations on matters of science and technology. Many devout individuals seek guidance on these issues, Slattery says, though clergy members often have little exposure to these topics in their own education.

One course at Howard University’s School of Divinity, for example, introduces the idea of paleoclimatology and considers the possible role of climate change in the migrations of populations mentioned in the Hebrew Bible. This understanding is relevant to today given climate change’s impact on displacing vulnerable communities.

Although climate change has become a heavily partisan subject in the last 20 years, Slattery says it doesn’t have to be presented that way moving forward.

“The best scientific engagement doesn’t happen on debate stages,” he adds. “Even in the most conservative seminaries, I have never found a person who doesn’t want to be a good steward of the Earth. Even if you’re a staunch believer in the reality of Adam and Eve, Adam and Eve had to take care of the land around them.”

“Science is made up of millions of ideas, but in the end science is people,” he adds. “We want you to engage with these people. These aren’t just ideas to be politicized. It’s people to have relationships with.”

DoSER’s focus on effective engagement is especially important when one considers that deep tensions between scientific and religious communities stem from centuries ago and political weaponization of issues continue to strain the two groups. History has shown, however, that turning conflict into conversation is not only possible, but also crucial to the future of scientific enterprise.

In the 1600s, Italian astronomer and physicist Galileo Galilei faced trial and conviction for publishing evidence of heliocentrism, a cosmic model that places the sun at the center of the solar system or universe. The concept – now accepted as fact – was met with criticism from the Catholic church for going against the accepted science that placed the Earth at the center of the universe.

“Galileo became this martyr for science. That’s the narrative that was woven,” Slattery says. “Science was going up, and religion was going down.”

Another battle royale came about in 1859 when Charles Darwin introduced his theory of evolution by natural selection in the book “On the Origin of Species.” Soon after, Slattery says, atheists latched onto the theory, promoting it as evidence behind their beliefs.

“When religious people tried to bring in evolution, it wasn’t shot down just because of the science,” he adds. “It was shot down largely because many believed that evolution was going to bring us to atheism.”

By the early 20th century, discussion of evolution helped spawn the concept of eugenics, popularized by Sir Francis Galton, that promoted humanity’s control of its evolutionary future through selective breeding and reducing “unfit” populations.

“Eugenics, for many people, connected together this notion of scientific progress and spiritual progress,” Slattery says. “They felt it was the responsibility of all humans to take their God-given rights and control their own evolution.”

Eugenics exacerbated and legitimized already prevalent racist, ableist, and xenophobic ideas, opening the door for ever-descending atrocities including mass sterilization throughout North America, Western Europe, and European controlled African and Australian countries. While the Nazi regime most infamously used eugenics to rationalize genocide, Slattery’s essay earlier this year on Science.org helped to uncover the truth “that AAAS, Science, and many in the scientific community supported the biggest proponents of eugenics in the early 20th century.”

Eugenics fell out of the public conversation after World War II, but it continued, and still continues, to influence discussions about evolution in some religious communities. Based upon the connection between eugenics and evolutionary discussions in the early 20th century, many anti-evolution groups in the late 20th and early 21st centuries tie together any acceptance of evolution with the horror of eugenics.

Slattery notes that the terrible legacy of eugenics is but one example of how acknowledging history – the “why” behind a religious community’s position on a scientific issue – enables AAAS and DoSER to do better science engagement on difficult subjects with a wide variety of religious communities. Resources from DoSER’s workshops, symposia, lectures and publications over the years are available to all who are interested in working more with religious communities.

“Science is made up of people,” Slattery says, “and the vast majority of them are trying to make the world a better place. Engaging with people instead of just ideas, encountering difficult histories together, acknowledging failures of the past, and approaching everything with humility are key components of the type of engagement that has any hope of raising scientific literacy and building trust in the scientific community of tomorrow.”