The virtual session brought together faith leaders and attendees, including many STEM graduate students and other early-career scientists, to discuss how religious communities are engaging on critical environmental issues.
4 minute read
Save to my list
Download as PDF

This is a reposted article from the AAAS News, written by Elana Kimbrell; read the original here. 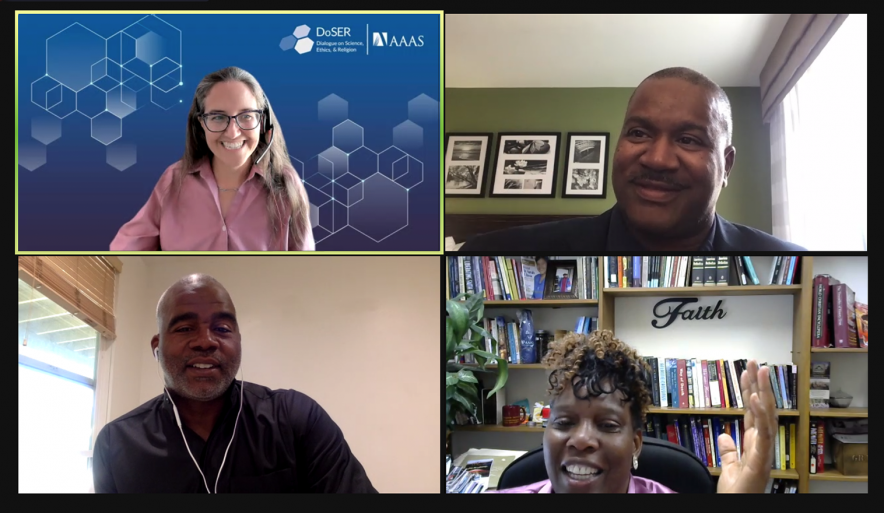 This year’s Inclusive SciComm Symposium, hosted by the University of Rhode Island’s Metcalf Institute, included a session on October 15 on “Conservation and Environmental Justice: Faith Community Perspectives on Science Communication and Engagement.” It was organized by the AAAS Dialogue on Science, Ethics, and Religion (DoSER) program with support from the AAAS Center for Public Engagement with Science & Technology. The virtual session brought together faith leaders and attendees, including many STEM graduate students and other early-career scientists, to discuss how religious communities are engaging on critical environmental issues affecting them and marginalized communities around the world.

In opening the session, Dr. Rob O’Malley, a project director for the DoSER program, noted that he considered all the panelists to be “fellow science communicators,” a reflection of the engagement each has been doing in their communities to address issues at the interface of science and society.

Reverend Rodrick Burton, senior pastor at New Northside Missionary Baptist Church in St. Louis, MO and AAAS How We Respond project contributor, said that both a challenge and an opportunity for involving faith communities in environmental justice is that “in African American spaces, in addition to fighting for survival, police reform, criminal justice… you have to [ask people to] join this fight too. People feel burned out. But yes, yes you do need to be in this. This affects everyone.” Much as African Americans have had to push for equality and participation in other areas, they have had to “push into this space of environmental justice and green theology.” He highlighted Green the Church as an organization he is involved with that helps bring together Black churches with environmental groups and causes.

Reverend Burton pointed out that the civil rights movement was led by Black churches, and thus helped diversify scientific workspaces away from being mostly male and white. He also suggested that faith communities have a lot to offer science in the form of moral frameworks, asking scientists to consider, “What would faith traditions and philosophers say about this?”

Often scientists – many of whom are people of faith– don’t think they can easily engage in conversations about their science with others in their religious community, sometimes because of perceived tensions between science and religion. Dr. Sharon Grant, associate professor and founding director of the International Center of Faith, Science and History at Hood Theological Seminary and a AAAS Science for Seminaries project leader, shared that in her earlier career as a biologist, she always wanted to talk about her work within her faith community yet never found the opening she was looking for. “The scientists are already in your faith community, we are just not giving them a good opportunity to share what they do,” she said.

Ibrahim Abdul-Matin, author of Green Deen: What Islam Teaches About Protecting the Planet and co-founder of Green Squash Consulting, suggested there is room for many fruitful conversations that interweave the two. “Observing the world is a form of worship,” he said. “You don’t need to have a discussion about the origins [of the universe].…There are ways to translate so everyone can talk about same things.” He also noted that “in Islam, water is a right. Every faith tradition talks about how we treat the earth.” He suggested science communicators and scientists tap into that rich history and knowledge to inform their scientific work.

One of the ways to do this, noted Dr. Grant, is to “never underestimate the power of a good story… especially from those whose voices have been marginalized… Connect the science with the lives of the people you are talking to, and privilege the stories of African American women.” For scientists and science communicators, the challenge is to figure out how “this world of facts connects with your world of values. This is where faith has a chance: what does God say about being in love with God, and with each other?”

As an example of how to create such connections, Dr. Grant discussed an intergenerational science camp held in her community in the summer of 2021, where people were asked to remember their own stories of working the land. The camp helped both young and old come to new realizations about the effects of human activity on the environment, and the importance of the environment to all our lives.

Reverend Burton pointed out that his entry into environmental justice was a pragmatic one – when he was interviewing for his position a decade ago, he wanted to find ways to save the church money. He knew that solar panels could be a way to do this – but after this initial project came others, drawing him into a realization that environmental justice was linked to so many other challenges. He has also focused on a very personal concern related to shifting away from fossil fuels: its impact on his kids’ and his wife’s asthma, which is also an issue for a majority of his congregants (see this AAAS-produced video for more on this).

During the discussion, panelists noted that the costs of a transition to a cleaner economy can disproportionately impact already-marginalized communities. Reverend Burton shared concerns voiced by Indigenous leaders about green technologies on their lands. Abdul-Matin likewise said the people most negatively impacted by these decisions, such as where to put new transmission lines or pipelines, have to be able to take advantage of opportunities and participate positively, whether that is through jobs or decision-making processes. He believes part of this is science education, which can help people get over “the hurdle of thinking that is [not] for them.”

“We have to have a society that is scientifically literate and interested. It matters because your quality of life is at stake,” said Dr. Grant.