This project explores the most interesting and pressing questions surrounding Judaism and science.
< 1 minute read
Download as PDF

Scientists in Synagogues is a grass-roots program organized by Sinai and Synapses. Its goal is to offer Jews opportunities to explore the most interesting and pressing questions surrounding Judaism and science. The project provides grants to a diverse group of synagogues to develop programming that incorporates science into the life of the congregation. 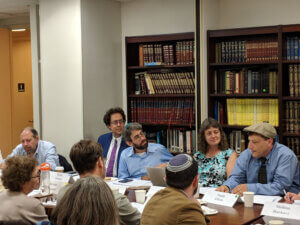 It is rarely a challenge to get Jews to embrace science. However, it is often much harder to get Jews excited about Judaism. According to a national survey fielded by Rice University and AAAS as part of the “Perceptions Project,” when asked if science and religion are “in collaboration,” “independent,” or “in conflict,” Jews were higher than any other group in viewing religion and science as “independent.”

Scientists in Synagogues believes that rather than bifurcating identity, it is more constructive to explore how people can combine disparate parts of themselves at the same time. The project encourages people towards a more integrated perspective, both for their own individual sense of self and for the larger conversation surrounding Judaism and science.

I usually have to pull teeth to get people involved. Now, so many people have come and been engaged, we're rethinking how we do adult education.

This project is organized by Sinai and Synapses  (which is incubated at Clal – The National Jewish Center for Learning and Leadership) in collaboration with AAAS DoSER, and funded by the John Templeton Foundation, as well as other individual donors.