DoSER partnered with researchers at Rice University to investigate more deeply the relationship between science and Evangelical Christianity and to develop resources that will enable these communities to communicate more effectively.
2 minute read
Download as PDF 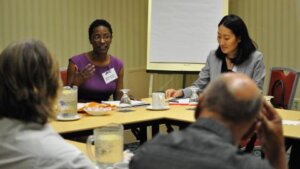 Evangelical Christians constitute as much as 30% of the U.S. population and their influence on public support and perceptions of science is considerable. When compared to other religious groups, Evangelicals have often been more wary of science as evidenced in debates about evolution, stem cell research, and climate change. However, the community is diverse and there is evidence to suggest that it is becoming more open to dialogue.

DoSER partnered with researchers at Rice University to investigate more deeply the relationship between science and Evangelical Christianity and to develop resources that will enable these communities to communicate more effectively. Print materials and workshops were developed to help promote understanding of both scientific facts and each other’s concerns for the benefit both scientific advancement and the public at large.

For more information about the genesis and goals of the Perceptions Project, read this detailed description from the winter 2013 issue of the American Association for the Advancement of Science’s Professional Ethics Report.

Below is a list of resources offered through the Perceptions Project.

The Perceptions Project held six invitation-only workshops in 2014 and 2015 that brought together scientists and religious leaders for discussion about topics of mutual concern and possible tension.

2. Videos from Workshops and Conference

The first three of these professionally facilitated workshops fostered dialogue between scientists and leaders of the Evangelical Christian community. Building on lessons learned from the initial meetings, the project hosted three additional workshops that brought together scientists and leaders of Catholic and Orthodox Christian, Mainline Protestant, and Jewish groups. Through this process, the Perceptions Project sought to improve communication and foster productive relationships between scientists and religious leaders. Watch highlight videos from the Pasadena, Denver, and Atlanta workshops. Find the recordings of the Perceptions: Science and Religious Communities conference events here.

This report describes the purposes and processes that led to these and other insights from the Perceptions Project. It also outlines some of the resulting recommendations and outcomes. Download the final report here.

The Perceptions Project was administered by the AAAS DoSER program and primarily funded by a grant from the John Templeton Foundation, with support from AAAS. The project launched in April 2012 and ended April 2015. It was a joint project of AAAS and Rice University, guided by an esteemed advisory committee in consultation with: