Rosita Kaaháni Worl is president of the Sealaska Heritage Institute (SHI) in Juneau, Alaska. We spoke with her about her work documenting a traditional Indigenous Alaskan ceremony, and Indigenous Alaskan cultural knowledge loss. (Photo of Dr. Worl: S. Areman/SHI.)

You are working to preserve the cultural practice and heritage of Indigenous Alaskans. What does your project focus on?

The project is called “Opening Up the Box of Knowledge to the Ku.éex’ Ceremony.” The ku.éex’ [koo-eex] is one component of the mortuary complex practiced by the Tlingit, who are Indigenous peoples of Southeast Alaska. Charles W. Smythe, Ph.D., and the Sealaska Heritage Institute (SHI) Council of Traditional Scholars are working on this with me; we started in 2018 and end the project in 2020.

The mortuary ritual is complex, lengthy, and costly. The rites traditionally occur over a period of at least a year, beginning with the death of a clan member and culminating with the ku.éex’. The ku.éex’ ceremony is commonly referred to as a “potlatch” in English, but because many misconceptions exist about the potlatch, the SHI Council of Traditional Scholars has urged the use of the traditional term. Ku.éex’ refers to the memorial ceremony held generally a year after the death of a clan member; it is a complex religious ceremony that has significant economic, social, and spiritual components. In the ku.éex’, the social and spiritual balance that had been disrupted with the loss of a clan member is restored.

For a period, the mortuary rituals went underground, and their survival seemed questionable because of the suppression of Native spiritual beliefs and practices by missionaries and government authorities. Even today, at least one church continues to restrict the traditional cultural practices during funeral services for Southeast Alaska Natives.

Although the sponsorship of the ku.éex’ ceremony remains strong, many changes are evident, some of which are adaptations to changes introduced into the society. Other changes, however, are a result of a lack of knowledge and understanding. Senior clan leaders and Elders have expressed great concern that the younger generation is not adhering to the traditional practices nor understanding their basis. 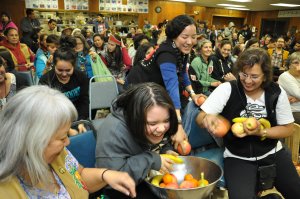 The goal of this project is to research and document the ku.éex’ ceremony and its variations within three communities. We are recording and analyzing with video of the ceremony from the three communities, and with two publications—a research paper and an instructional handbook that will be made available to the Tlingit community. And then the final phase will be a series of instructional workshops for younger and designated clan leaders led by members of the Council of Traditional Scholars.

What need is addressed by documenting the ku.éex’ ceremony?

Outside of one major anthropological study that is the most comprehensive analysis of the memorial ceremonies, little knowledge about the ku.éex’ is available to the public. This study attributed the survival of Tlingit culture largely to the continued practices associated with the ku.éex’. With the suppression of traditional beliefs and practices by Westerners, knowledge and understanding of this ceremony, even among the Tlingit, is fragmented. Senior clan leaders and Elders have expressed dismay that their cultural survival may be in jeopardy with the younger generation not fully understanding the traditional beliefs and practices of the ku.éex’.

The Sealaska Heritage Institute was founded “To Promote and Preserve the Tlingit, Haida and Tsimshian Cultures,” with a goal of providing cross-cultural understanding. Developing documentation of the ku.éex’ will assist the traditional scholars in teaching the younger clan leaders about a major cultural practice, and will ensure that these spiritual beliefs and practices survive.

“With the suppression of traditional beliefs and practices by Westerners, knowledge and understanding of this ceremony, even among the Tlingit, is fragmented. Senior clan leaders and Elders have expressed dismay that their cultural survival may be in jeopardy.”

What have you done thus far?

We have completed the research paper entitled “The Last Cry” and published in the Sealaska Heritage Box of Knowledge series, and have filmed two memorial ceremonies including the Shangukeidí of Klukwan and the Teikweidí of Angoon. 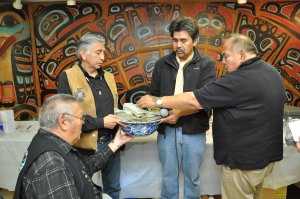 We secured the permission of clan leaders to film the ceremonies, but throughout the ceremony, participants would question why the ceremony was being filmed. Once clan leaders advised that they had given their permission for the filming, no further questions or resistance were evident, and no one left the ceremony. The fact that we were able to film two ceremonies demonstrates success—we have made progress in overcoming the hostility towards anthropologists and hostility to research.

SHI has also established a “Visiting Scholars” Program and affiliated “Senior Research Fellows” through which scientific research has been conducted. Scholars are required to share the preliminary observations or results through lectures at the conclusion of their research efforts. These lectures are filmed and available through the SHI website.

“The fact that we were able to film two ceremonies demonstrates success—we have made progress in overcoming the hostility towards anthropologists and hostility to research.”

Earlier, you mentioned missionary and government suppression of Native beliefs and practices. What challenges did you encounter in trying to document the ku.éex’ ceremony?

Because of the suppression, these ceremonies had basically gone underground. Convincing clan leaders and securing the permission to film the ku.éex’ were the biggest challenges.

There is also a challenge with cultural knowledge loss overall. Our Elders and clan leaders have been concerned that many of our younger people were not able to learn the full meaning and complexities of our ceremonies. Historically, members of the Council of Traditional Scholars have been clan leaders and Elders with deep knowledge of Tlingit culture. Now, their diminishing numbers are reflected in the inability to appoint new members who have the same kind of deep knowledge and expertise, which is notably evident in the appointment of new members who do not speak the Tlingit language.

The issue and challenges of the diminishing knowledge base when conducting research are compounded by the lack of knowledge and the misconceptions that are held by younger members, who insist that their knowledge or their practices are correct, and who challenge any opposing views. Because religious instruction is restricted from schools, teaching about Tlingit spirituality is a challenge. And of course, funding is always an issue.

What advice would you give to someone interested in doing something similar?

Research into religious and spiritual practices of groups who have been suppressed and colonized is a sensitive topic and should proceed with the utmost caution. If you identify a proposed research group, initiate a consultation process with them, and establish a partnership with someone from that population.

The SHI Research Policy, which is available on the SHI website, has many important rules to follow when working with Southeast Alaska Natives, which can be applied more broadly as well.

“Research into religious and spiritual practices of groups who have been suppressed and colonized is a sensitive topic and should proceed with the utmost caution. If you identify a proposed research group, initiate a consultation process with them, and establish a partnership with someone from that population.”

We spoke with Nancy Adleman about her experience as part of the Science for Seminaries program.

We spoke with Liz Barnes about understanding and addressing tensions related to religious identity and evolution, particularly in biology classrooms.

See all profiles
We use cookies on our website to give you the most relevant experience by remembering your preferences and repeat visits. By clicking “Accept All”, you consent to the use of ALL the cookies. However, you may visit "Cookie Settings" to provide a controlled consent.
Cookie SettingsAccept All
Manage consent