We spoke with Gillian Hue about changing a 600-year-old monastic curriculum, being aware of the cultural reference frames of your audience, and checking your biases.
Download this profile as a PDF
7 minute read

Gillian Hue is a Lecturer in Neuroscience and Behavioral Biology at Emory University. We spoke with her about changing a 600-year-old monastic curriculum, being aware of the cultural reference frames of your audience, and checking your biases. (Photos courtesy G. Hue.)

You have been working on the same science engagement project for more than a decade—tell us about it!

In 2008, I was a postdoc working with Science and Society at Emory. My mentor, Arri Eisen, was in the initial stages of the project, the Emory-Tibet Science Initiative (ETSI). The initiative is part of the Emory-Tibet project, and includes teaching a full science curriculum to Tibetan monks living in exile in south India. This is one of the largest changes to their educational curriculum in hundreds of years. It provides a really great opportunity to integrate some of what we understand about science from a Western perspective with what the monastic students are learning in their religious education. 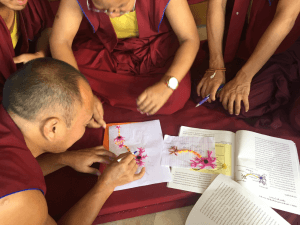 At the time, ETSI had been to India for one summer intensive course already, and I was brought into the neuroscience program in the second year of the pilot phase. We developed a five-year curriculum in which the monastics get training in neuroscience, life sciences (or biology), and physics. They also have a philosophy of science program included in the curriculum. Selected monks from a few different monasteries were invited to come to the summer workshops, and we worked that way for five years. Then the project moved into the implementation phase, where we’re in different monasteries and nunneries, and all the students, at a particular point in their monastic educational development, will start getting science classes.

This is my 12th year working with the project. I didn’t travel to India every year. When I just started my family, it was difficult to balance very young children with that travel, but I’ve been working on the curriculum and the distance learning project the entire time. Going into the sustainability phase, I’ve been asked to lead the neuroscience unit. As unit leader for neuroscience, this opportunity has allowed me to focus on the pedagogical and disciplinary priorities for our learners, in collaboration with the other unit leaders.

What need was the Emory-Tibet Science Initiative fulfilling?

His Holiness the Dalai Lama believes in “a dialogue and cross-fertilization between science and spirituality” and has said that introducing Western science to the monastic curriculum is important so that monks would start thinking about what scientific questions they want to ask, and would be equipped to ask those questions such that they could get useful answers. He thought it would be good to integrate science into their curriculum to allow them the opportunity to start asking these questions in the way that we’re accustomed to doing, with research design. 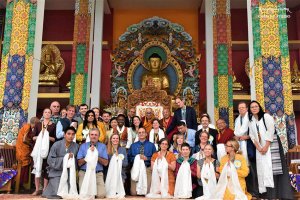 His Holiness the Dalai Lama has called this a hundred-year project. We had the pilot phase in the first five years, and now we have just had the first group of students complete the six-year curriculum and graduate in December 2019. So, we’re still in the early phases of the hundred-year project, but it’s been interesting to see how it’s changed and evolved over the years—the science has become an important part of their academic progress, including science questions on their Geshe examinations. The way that the students expect to engage with scientific material has changed so much in such a short time; it’s a relatively normal part of the curriculum now, and it’s been fascinating to watch that development. Science educators are being hired to work in the monasteries, and it’s impressive to watch all this happen.

The way that the students expect to engage with scientific material has changed so much in such a short time; it’s a relatively normal part of the curriculum now, and it’s been fascinating to watch that development. Science educators are being hired to work in the monasteries, and it’s impressive to watch all this happen.

What’s the next step in this hundred-year project?

Right now, we’re looking at what we’re calling the sustainability phase. We, the scientists and teachers, will provide the Tibetan monastics with the foundation that will enable them to continue without our external intervention, but with our support. The first group of students have completed the six-year curriculum; the nuns’ program started later and they are still in their six-year curriculum cycle. When that is done, they, too, will move into the sustainability phase where we will continue to support and mentor and guide, but from a little bit further away. This will allow the monasteries and nunneries to do this on their own—the goal is that these projects will be self-sustaining.

How do you handle the language and cultural barriers?

We work through translators. One of my favorite experiences is when I say one sentence and then my translator goes on talking for a long time in Tibetan. I realize, “I don’t think I said all of that. I’m not sure what my translator just said, but it looks like the students are getting it.” It’s been fun to watch the translators, who are also learning science, engage with the material in such a way that they feel a level of competence to be able to communicate about it independently. It’s really rewarding to see them take ownership of the material by teaching it in addition to translating. 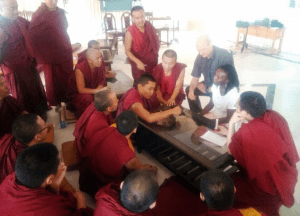 We also have cultural biases I have to be mindful of. In one of the earlier years, I was describing something about sensitivity to smell, and I wanted to talk about sharks and a drop of blood in the water. I saw my translator reaching for the word for “shark,” and he was struggling. And I realized that if he was having trouble with the word for shark, the whole analogy was going to fall apart, because most of the students weren’t going to relate to that. In the U.S. most people have “Jaws” or Shark Week as part of our cultural phenomenon, and we have this idea about how sharks work in our particular context. But for Tibetans, that’s just not a reference that’s relevant or meaningful.

So coming back and teaching in the U.S., regardless of the audience, I’m constantly thinking about, what are the expressions or the concepts that I’m using that I’m taking for granted? And it might just be age or generational, it might just be that they hadn’t heard of it, or these students are too young to know about this, or these students are from different backgrounds. It’s become really important for me to stay cognizant of my own assumptions that I’m bringing to the conversation; that’s been an important part of my own reflective experience as an educator.

“I’m constantly thinking about, what are the expressions or the concepts that I’m using that I’m taking for granted?… It’s become really important for me to stay cognizant of my own assumptions that I’m bringing to the conversation.

What advice would you give someone interested in doing similar work?

It’s really important for me to challenge my basic assumptions about what I know, and how I know what I know. A popular question from the monastic students is, “How do you know?” And I find that even with my college students now, I think about how we gained the scientific knowledge that we have—how do we understand it to be true? What assumptions have we made, and have we examined them appropriately? Discussing epistemology with science students isn’t standard, but I have found it to be remarkably useful in establishing basic assumptions and challenging dogma. If you’re presenting to a group where you all have the same background, then you make certain assumptions about the level at which you approach something. But if you are presenting to a group that has a different background or a different set of basic assumptions, you might need to think about how you communicate what you’re communicating, and where the problems might be.

This is particularly important in thinking about dialogue with religion and science and ethics. What drives the biases we have? In science we value objectivity, and place such an emphasis on it that having biases carries with it some negative connotation. But it’s important to acknowledge that we all have them. Understanding what they are, and checking them, as you plan your engagement is the biggest lesson that I’ve learned.

I want to emphasize that ETSI is a large-scale project that I am only a small part of, but it has been so meaningful to me personally. I think it has enhanced my teaching and communication about science with different types of audiences, and the same for others who have had the experience. Being aware of your assumptions and thinking about what that means when you interact with groups that have different assumptions than you do—that is so relevant for science and policy. What we assume is a basic, common knowledge as a scientist is not necessarily what extends across the board, either for lawmakers or members of the public.

I have always been really interested in propagating science literacy in a way that makes it comfortable for all stakeholders. Something on the scale of ETSI is not always necessary, but we need to reach people who are interested in how we do our science and what we’re doing, so that they can understand how it applies to the reality that they’re experiencing. This project, to me, seems like fertile ground for lots of lessons that can translate to other, smaller-scale projects. It’s a bidirectional relationship that enhances the experiences of all of us involved.

In science we value objectivity, and place such an emphasis on it that having biases carries with it some negative connotation. But it’s important to acknowledge that we all have them. Understanding what they are, and checking them, as you plan your engagement is the biggest lesson that I’ve learned.

We spoke with Katharine Hayhoe about the difference between being a good scientist and a good communicator, effective use of…

We spoke with Fatimah Jackson about the complementarity of Islam and human evolution, involving and empowering community members in research,…

We spoke with Shekhar Kolipaka about his approach to encouraging tiger conservation behavior in local Indian villages.