We spoke with Kate Carter about showing your full self as a scientist, radical empathy, and helping people feel comfortable with science.
Download this profile as a PDF
8 minute read

Kate Carter is the Director of Community Science Education for the National Center for Science Education (NCSE). We spoke with her about showing your full self as a scientist, radical empathy, and helping people feel comfortable with science. (All photos courtesy K. Carter.)

Public science engagement is your actual job! What do you do?

I run an outreach program that is targeted to communities that traditional science outreach typically doesn’t engage. That can mean geographic areas, like rural communities, or people who, for whatever reason, can’t afford to go to a science museum, or people who don’t feel comfortable with science. It started in Iowa in 2015, so it’s still pretty new.

I also run a graduate fellowship program that trains graduate students who are attending universities in those communities where climate change and evolution are not well accepted. I help them figure out strategies to share their own research and share science more broadly with their communities.

How does your work fit into the mission of the NCSE?

Since 1981, the NCSE has been responding to what we call “flare-ups,” when there is a legal challenge to evolution or climate change standards in a curriculum. That’s still really important, but now that’s just one piece of a puzzle. If the only thing you do is have outside people come in and mobilize, then you’re not really changing mindsets in the community. The goal for my engagement program is to reach these community members and help bring them into science, to meet them where they are and help them take the next step. With our activities, the idea is that people will walk away feeling like the distance between themselves and a scientist is much less than they built up in their head.

Tell us about the program activities.

There are two aspects of this program, the activities that we provide, and the training of people that are working in the locations where the activities take place. We only work in places that are free and publicly accessible, so we do a lot of work in libraries, in farmer’s markets and community festivals. So, we not only are helping break down the geographic and financial barriers, but we are also trying to reach people who may not self-select to go to a talk at a university.

Our activities are designed to have a very low barrier of entry. Often when organizations talk about activities with a low barrier of entry, the volunteers will seem patronizing. In contrast, we design activities that are volunteer-facilitated instead of volunteer-led, where the participants can have an exploration of their own and discover things instead of more traditional vertical learning where the volunteers are imparting knowledge. It’s more of a discovering together.

In our activities, we set up a living timeline where each time period corresponds to a distance. A period that’s 32 million years long would be 32 feet long. The participants try to recover animals from different time periods and solve different puzzles. Rather than someone lecturing them about the different time periods, they’re engaging with the material themselves. It’s more horizontal learning than vertical.

We design activities that are volunteer-facilitated instead of volunteer-led, where the participants can have an exploration of their own and discover things…. It’s more of a discovering together.

How does the training component help volunteers to approach people of faith?

We have a no-conflict approach because we do work in a lot of religious communities. We are often engaging with conservative Christian communities, conservative Protestant churches, Evangelical churches. Especially when we talk about evolution, it’s really important that we meet people where they are. We set up the activities so that they aren’t designed to immediately incite conflict, and we train the volunteers to defuse the situation.

The training has multiple parts. We encourage the volunteer to help the visitor see the scientific reasoning in their logic, to bring the visitor into science. For example, if someone is debating climate change with you, rather than engage in the debate, you can help identify the different parts of their argument like, “Oh, you’re stating a hypothesis.” “Oh, it’s really cool that you have evidence.” That brings them into the fold of science. We also strongly encourage people, especially academics, not to debate. Many times, a scientist will use scientific evidence in a debate, whereas a member of the public who is hesitant about evolution will be either talking about it from their personal experience, or they will be bringing up their social and their religious values.

It is very rarely a constructive discussion when one person is debating with evidence and one person is debating with values. They’re both very important ways of looking at the world, but you can’t address one with the other. Evidence does not change values, and values do not change evidence. We train volunteers to recognize the difference between evidence, experience, and values, and also to avoid debate altogether.

Too often, we don’t show our full selves in science. We show the part of us that is an intelligent scientist, but we don’t show what makes us a full person. So, maybe you grew up in the same community as the visitor, or maybe you both have the same value about trying to make sure that the kids of the future are getting a good accurate education. Try to not be afraid of inserting your experience into sharing the science.

Finally, we walk through a lot of radical empathy activities. So, getting at what is causing this person to be uncomfortable, and how can we understand what their values are. And often more importantly, what their fears are and how can we continue a conversation with a person in a way that leverages these core values, while being respectful of what they might be afraid of in the conversation.

What advice would you give someone who wants to do something similar?

If your goal is to engage religious communities, you need to see the shared human emotions that underlie yourself and the people that may be initially hesitant about it. When we first ask people to do the radical empathy activities for engagement with a religious community, we ask them to understand what people value and what people fear. Often, the first answer volunteers give is that the community values religion and fears science. And that’s rarely true.

You need to care about doing meaningful and effective work, not about feeling superior or right. A lot of people really value their community and the things that they hold dear in their identity, and that’s true of both scientists and non-scientists. A lot of people are afraid of the implications of being wrong, and that’s very different from being afraid of science. Really trying to understand the nuances and shared human emotions that are powering their reactions will help you have a much more productive conversation.

We provide free kits for all our volunteers, so whoever wants to start this is welcome to check with us. We provide the training and activities; we just ask that you do them.

Why do you think it’s important to engage the public about science in this way?

Without being too dire, the last two or three years have suggested that there is a growing divide in people’s minds between scientists and non-scientists. It isn’t enough to be able to communicate with just the people who already want to listen; you need to be able to reach the people beyond, because those are the people where it can make the biggest difference.

In one survey, we ask people whether they’ve had a conversation with a scientist in the last five years on a topic other than science. What that’s asking is, do they have a scientist in their social group—could they talk about the Kardashians with a scientist? Or, recipes, or their kid’s soccer team schedule, or anything other than science. Five out of six people say no, that they haven’t. If scientists aren’t able to bridge that gap and to bring people into their community, then they are going to be leaving behind a very significant portion of the population.

Have you learned anything surprising in the course of your work?

You encounter families, parents with children, at your activities. How do you stay true to the science while being careful to not create friction between the child and parent? 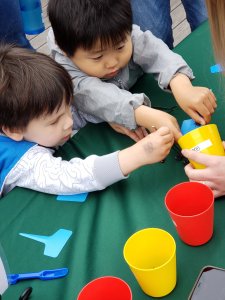 Children learning about mosquito control by interacting with an NCSE activity.

We acknowledge that it may be difficult for parents for many reasons. One may be that the parent may not want their child learning about evolution. In that case, it is completely reasonable to engage in a friendly manner, to have fun playing with the parent and child. We frequently have people that will say, “I don’t want my child learning about evolution,” but who will then allow the child to continue playing with the outreach activities. In that case, we respect the soft boundary that the parent has indicated, and we help the child and the parent do things like make observations or predictions. And yes, they’re doing it about evolutionary topics, but the goal is not to say at the end, “Haha, we tricked you into learning about evolution.” The goal is for the parents to realize that scientists are not going to push past their boundaries, that they can be respectful of those boundaries and still provide a fun, engaging activity for the kid.

We also try not to put the parents in a situation where they will have to admit to a child that they don’t know the answer. Sometimes when people get angry about things, what’s really underlying is a fear of looking stupid in front of their child.

You also do public engagement training for graduate students, right?

We’re just onboarding our second cohort. We meet every other week and go through a different topic, just like a class. And then we help them find events in their local communities, because each community is different and not monolithic. Different communities have different ways of effectively engaging their public. And then we try out different interpretations and talk through what went well and what could have gone better. Eventually, they will create an activity that will be shared with all of our national clubs to share their own science. So, how to develop an effective community activity for the area they’re interested in.

We’re hoping that, at the end, the graduate students will be able to do outreach in a way that is not just effective for furthering their careers, but is really engaging the communities they’re part of.

Any final words for someone who’s just getting started in public science engagement with religious communities?

The only way to learn is to go out and do it, but you also have to be willing to change your approach. Combine boldness and flexibility.

The only way to learn is to go out and do it, but you also have to be willing to change your approach. Combine boldness and flexibility.

We spoke with Israel Borokini about his work in Nigeria on traditional and ethnomedicinal plant usage, building trust with local…

We spoke with Guy Consolmagno about the universality of wonder, joining the Jesuits while being a scientist, and doing science…